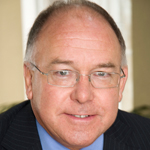 Cyber Security: “I think we need to spend a lot more on cyber security.  Defend our cyber borders, as much as we defend our physical borders and international interests.”

On the influence of Social Media: “I think that there’s a lot of work to be done in drawing a sensible balance between electronic and real life, and social engagement.”

Alan was born in Hastings, Sussex in 1944.  His earliest recollections include the sounds of doodlebugs flying overhead during the Second World War.

During the war Alan’s father was a Royal Engineer and saw action in France where he was one of the fortunate ones to make it back to England during the Dunkirk evacuation.  Post war Alan’s father worked for a large local timber importer rising to the position of MD.  Alan’s paternal grandfather was a printer and on his mother’s side his grandparents were comedy actors.

Alan attended Hastings Grammar School (1955-63).  He recalls his love of mathematics and calculation having being taught by Tom Cookson, who was Catherine Cookson, the authoress’s husband.  He studied French and Geography at A-Level.

Although there was a push for grammar school students to go on to University Alan was more interested in career prospects post-graduation and opted to attend St Paul’s College in Cheltenham where he trained as a teacher.

Post St Paul’s (1966) Alan was recruited by the Army and joined the Royal Army Educational Corps and spent 3 years teaching at the Junior Leaders Regiment of the Royal Armoured Corps.  He then transferred to the Royal Army Ordnance Corps in 1969 where he rose to the rank of Brigadier.  Alan retired from the Army in 1998 having served 32 years.

Alan describes the Army Ordinance Corps as the ‘supplier to the Army, experts in translating peacetime needs to wartime needs, for mobile supplies’.  Logistics, and stock control were key.  Alan notes the importance of capturing requests (shadow demands) as well as fulfilment.  Once shadow demands for an item reached a set threshold the item would be “in-stocked”.  Data was originally held in Kalamazoo binders.

In the 1970s, as second in command of 11 Ordnance Field Park, Alan attended a ADP (Automatic Data Processing) course.  He subsequently joined the Army’s Computer Systems Development Wing, trained as a Systems Analyst and became an expert on the assembly language PLAN that was used to program the mainframe ICT 1900 series.

Supporting the Army Air Corps Alan worked with the global RAF system 472.  In the early 80s Alan joined the ADP Team for Headquarters UK Land Forces and had responsibility for computer support to the UK Army.  It is at this time he had dealings with Lynwood who produced TEMPEST screens, being of a very low emission spec required in a secure environment.  Utilising BASIC Alan developed a headquarters information system & then subsequently taking advantage of the functionality of the Commodore 64 built a POW system utilised during the Falklands conflict.

In conjunction with the Royal Signals Alan set up the Army Command Information Systems Agency (ACISA) in Blandford (1986/87).

On promotion to the rank of a Full Colonel, consequently joining the General Staff, Alan became IT Adviser to the Quartermaster General (QMG) in the Ministry of Defence, in London.  Alan served under four different QMG’s.  At the time of Alan’s retirement the QMG was General Sir Samuel Cowan KCB CBE.

In the early 90s, when there was a political preference to outsource, Alan put forward the case for setting up the Logistic Information Systems Agency (LISA) within the army.  Alan became its first CEO with a staff of 650 and pioneered an innovative outsourcing partnership with EDS.

Outsourcing Consultant, proponent of upfront goals, clear objectives, identified business benefit, all written in to contract in order to measure achievement.  Worked for Morgan Chambers, the outsourcing specialists for a number of years.

Worked on a review of Government IT procurement reporting to the Efficiency Reviews by Sir Peter Oliver Gershon, KBE, FREng (2004/5).

Setup an agency for the State Veterinary Service part of the Department for Environment.

Today Alan offers IT tutoring to older members of the community.

Alan assisted in the formation of the Stay Safe Online Safety and the education of interested parties through talks on cyber security and home visits.

Alan joined the BCS in the mid-80s.  Undertook Membership review on behalf of the BCS (1997/8).  Advocate of expanding the BCS ‘beyond pure technology’ …. ‘Design, Coding & Development & beyond’ in effect expanding the BCS’ appeal to wider business and academic membership pool.

Alan became President of the BCS in 2008.  Alan’s Presidential theme was ‘what can the BCS do for the Community’.  “I wanted people to be able to bring their skills to benefit society in general.  But, with the accent on volunteering.”  A volunteers’ register was set up and this was made available to the volunteering charity iT4Communities.

On the theme of professionalism, the CITP (Chartered IT Professional) qualification was developed under Alan’s tenure.

Post his Presidency Alan spent a number of years as a Trustee of AbilityNet.

Major General (Ret) Bill Robins CB OBE who Alan describes as trusting, self-effacing, hyper-intelligent, a great expert in getting information out of people, by just talking to them and listening.

Alan foresees the expansion of the Internet of Things, including chips implanted in the body to assist health monitoring.

Alan’s advice to someone entering the IT industry today would be “Embrace it.  Never ever assume that you’ve learnt all there is to learn.”

Interviewed by: Jonathan Sinfield on the 21st November 2017 at the London offices of BCS