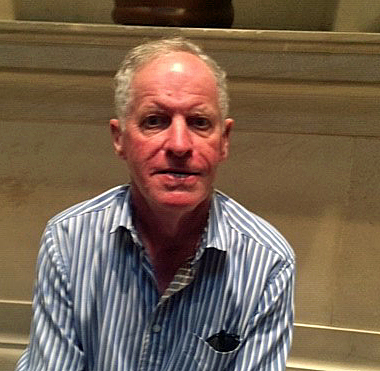 Alastair Macdonald, CB, was born in August 1940, in Twickenham, in south-west London. His father was an engineer and worked for a company that produced meters that controlled the flow of pressure in power stations and major heating systems; it was later taken over by GEC. His mother was a housewife and looked after Alastair and his two younger siblings.

Alastair went to Wimbledon College, a Jesuit grammar school in south London. He says of his time at the school: “We were very well taught by the Jesuits.  They provided a, a demanding academic discipline.  They were very proud of their traditions of teaching classics and arts subjects. ….  I have pretty fond memories of school.”

Having gained good A levels, and being exempt from National Service, Alastair sat for the Oxford and Cambridge exams. He spent the summer holidays working in shops like Foyles, and then in October 1959 went to Trinity College, Oxford to read Modern History.

He says: “I went up to Oxford in October 1959, where it was quite a cultural shock for me and other people of my age, in that almost all the people in the years above had done National Service, and they had an experience and a maturity which my year didn’t have. It made us look quite immature, like overgrown schoolboys, compared with two or three hundred people who had actually been either in Northern Ireland, Aden, or, at sea, or whatever.  They had gained experience which we hadn’t.”

In his second term, Alastair became involved with Isis, the student magazine; he took over as editor in the winter of 1961. He says: “Sometime round about my second term at Oxford, I began to think that I wanted to have more as my memories of the place, than playing sport badly, drinking in the pub, even though that had its attractions.  I wanted something more tangible. I began going to editorial meetings of Isis. I happened to be lucky in that the people of the year above me were very lively individuals, who had a very clear vision of what they were going to do.” They included Richard Ingrams, Paul Foot, Willie Rushton, who wasn’t a student at that time, and Andrew Osmond. Alastair continues: “They spoke about wanting to start a sort of satirical magazine like the French Le Canard Enchainé, and the term after they left, indeed the term in which I took over as editor of Isis, they started this strange little magazine which had the title Private Eye. I found them, good fun, very stimulating.”

Having completed his degree Alastair moved into journalism, responding to an advertisement for an editorial assistant for Spectator magazine. Alastair stayed with the Spectator for nine months and in 1963 moved to the Financial Times as a reporter.

Alastair says: “I became a part of team of young people whose job was to write a feature, probably once a week, maybe three times in two weeks, about the prospects of a particular industry … I think the first one I wrote was about the caravan industry, where you were obliged to seek out the players in the area you were writing about and to interview them, and write up a 900-word piece about the prospects for that industry. That experience was actually almost like going to a business school for a year or two.”

Alistair’s career progressed at the FT and he went to work in the Washington Office between 1965-1966 and then returned to take up the role of Features Editor.

Having made good progress at the FT, Alastair decided that he was not sure he wanted to remain a journalist for life and began to explore other options. He explains: “Being in Washington, I got to know quite well a lot of people at the British Embassy who were kind enough to say, ‘Well, if you are ever looking for something else, why don’t you try the Civil Service?’ because, this is what typically happens in a week. It sounded quite stimulating.”

At the age of twenty-eight, Alastair sat the Civil Service entry examinations and started a career in economic departments, in particular the Department of Trade and Industry.

Asked who were the best ministers to work for, Alastair says: “There were several who for different reasons stand out in my memory.  Norman Tebbit, because he was very clear in his thinking, very quick to judge which way he wanted to go on an issue, and, and absolutely clear in his direction and his self-confidence in taking decisions. I very much enjoyed working for Michael Heseltine. He was very experienced, very positive, with very clear ideas.  One felt with Heseltine that he had wanted to have the job of being the Secretary of State for Trade and Industry for a long time. He was particularly anxious that civil servants should be close to industrialists, should be listening to them, and should be influenced by them and should report back to ministers the feeling of industry.”

In 1982, Alastair was appointed to a Grade 3; role as the Undersecretary for Information Technology; working closely with Kenneth Baker, especially in IT Year. Alastair explains: “The Government part-funded an office called the IT Year Office, which organised a great number of events around the country.  There were many government initiatives towards IT at the time, which Kenneth Baker greatly enjoyed administering.  I think the one that most people still remember was the Micros in Schools scheme, which some people would say opened the eyes of schoolchildren, and their parents, to what was actually happening in IT. Playing games on the BBC Micro, was many people’s introduction to IT. There were many other things that Kenneth Baker introduced.  He was a very stimulating minister and he was very great fun to work for.”

Although IT was still in its infancy the eighties saw a lot of change with the launch of the personal computer by several companies, the building of the System X digital exchange for British Telecom by Plessey, STC and GEC which would see telephony move from analogue to digital, the launch of the BBC Micro, Acorn and the Sinclair ZX range.

Alastair says: “We probably, in those years, had an exaggerated view as to the extent to which relatively small IT companies in the UK could build themselves up to the point of being really internationally competitive.  Many of the companies which benefited from the software product scheme failed to make the grade.” Alastair goes on to describe how being the Government’s flagship IT company was both a blessing and a curse for ICL which had been given Government guarantees to help keep it afloat: “Sometimes there were people in ICL who would feel that their customers had to buy from them because they were the Government flagship and other people would almost say, we’re not interested in buying from a company simply because it is the Government’s flagship. That was quite a quandary for the senior management of ICL.”

Among the many other projects that Alastair was involved in during his tenure as Undersecretary for Information Technology, was the gestation of the Alvey Project. This was the Government’s response to the growth of Japan’s Fifth Generation initiative in computing.  The Alvey project aimed to develop precompetitive technologies in software engineering, intelligence and knowledge-based systems, man-machine interfaces, VLSI and academics which would be co-funded and developed by the Government, academia and industry.

Alastair says of the project: “Looking back on it, I think there was a cultural gain from Alvey. For the first time in many disciplines, and certainly in IT, the three partners of government, industry and academe, working together as teams, was a very powerful and positive output from Alvey. … In terms of the individual areas, like MMI and similar, I’m not sure whether tangible commercial products developed from that pre-commercial research, but I think the cultural change has become permanent in our industry.”

In 1984 Alastair moved to head the telecommunications division to prepare in particular for the privatisation of British Telecom. Alastair found himself pulling together the many and various strands of activity that needed to be done in order for the process to work, from getting legislation through Parliament to set up the Telecoms Act, negotiating the licence with British Telecom as to exactly what they could do, to the actual stock flotation which was to be an international affair. He says; “Every Monday morning I would chair a meeting of Kleinwort Benson and Linklaters, our lawyers, the Treasury, and our own team at DTI, and thrash through what had to be done, where we had got to on a thousand issues or so. We were monitored closely by Norman Tebbit himself, who took a very keen interest in this.  It was very useful, actually, to have the discipline of knowing that you were being monitored all the time.”

Despite initial scepticism both inside and outside Government that the project could be done, it became the biggest flotation that the City of London had ever seen.

Alastair went on to a secondment with the MOD before becoming Head of the DTI’s Industry Group in 1992 until his retirement in 2000, where he was responsible for policy advice across a full range of industries.

In 2001, Alastair became President of BCS, The Chartered Institute for IT and during his tenure he helped to change the governance system from a fifty strong decision making Council to a more manageable Trustee Board based system with the Council in an advisory role.

Alastair reflects on the lessons he’s learned from his career, saying: “I can certainly think of one or two instances where, particularly in the flurry of IT82, I wasn’t as sceptical as I should have been about some of the proposals for government financial support that I went along with.”

He goes on to add: “I was probably a bit slower than I should have been to make sure there was proper and thorough evaluation of whether a project had been implemented properly and was paying off in the way that we had expected.”

Interviewed By: Richard Sharpe on the 4th January 2020 at BCS London