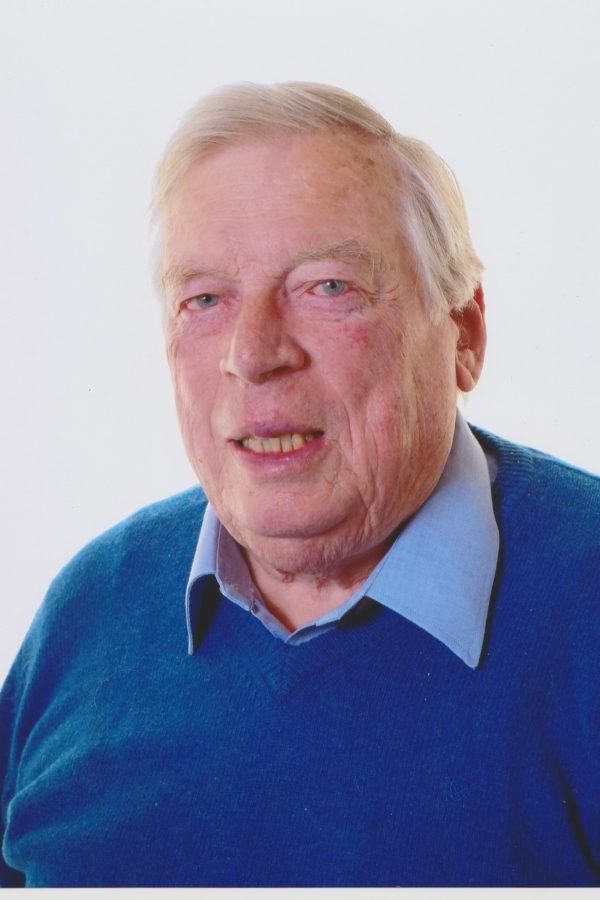 “I was co-founder of Cambridge Consultants which is really the start of the Cambridge phenomenon in 1960 and then subsequently I was technical director at Sinclair Research in the years from 1977-1986.”

David Southward was born in Skelmorlie, Scotland, in 1936. He is the eldest of four brothers. His father was a GP in a Scottish village. The family moved to London when his father was called up and then he, his mother and brothers, moved to Abersoch in North Wales when war broke out.

David enjoyed his school days greatly, going first to The Old Hall preparatory school in Wellington and then on to Rugby. As well enjoying sport, David also enjoyed building and dismantling things; he, together with a friend, dismantled a radial engine in one of Rugby’s storage sheds, he built hi-fi sets and radiograms, alongside model aeroplanes. He says: “I’ve always liked to find out how things worked and put them back together again.”  David was inspired by his chemistry and physics teachers.

In 1953, with the prospect of National Service, and having achieved seven O Levels and 3 A levels, David left school slightly early to go to the Ministry of Supply to undertake an apprenticeship scheme on offer there. He explains: “You spent a year at the bench filing your set of tools and learning how to use machines from lathes to mills, welding and so forth, and you were also studying at a local college. They also subsequently paid for your further education, which in my case was Cambridge.”  He met Tim Eiloart through the scheme, and they worked together at Woolwich Arsenal for the year.

During his year in Woolwich, David’s enthusiasm for making things continued to grow as he explains: “I was still very keen on making things, and things that I had been making had progressed from model planes to a fourteen-foot speedboat, which I had built on the top floor of our Harley Street house. It was a major undertaking to remove it; I had to take all the doors off upstairs, wrap the boat up in, in carpets, lower it over the side of the house, in through a consulting room, and then out through the front door.” The boat was used by the whole family on holidays in the South of France.  He adds: “We used to water ski, at a time when nobody water skied.  In fact, you couldn’t buy water skis, that I was aware of, so I had to make all those too.”

In 1955, David transferred to Trinity Hall College, Cambridge. He graduated in 1960 with a degree in natural sciences and chemical engineering.

After completing his apprenticeship and degree, David, on the advice of his father, spent a year in a chartered accountant’s office in the City, studying accountancy. He did not enjoy it.

To escape his accountancy experience, David rang his friend Tim, who had also graduated by this point and was working for the Psychology Laboratory and had at the same time started the Cambridge Consultants as a technical translation service. Tim offered David a job at the Lab despite the fact that he had not authority to do so, inevitably, when his manager returned from holiday, both David and Tim decided to leave and start a workshop together. With financial help from their fathers, they founded Cambridge Consultants and the original translation work gradually petered out.

David says of the enterprise: “We formed the workshop, and we started taking on work from the Psychology Laboratory and other laboratories, and industries within Cambridge.  We employed three or four instrument makers, they were from the Cambridge Instrument Company, who had a very good apprenticeship scheme, so they were very skilled workers. But we were always looking for something to make our fortune as it were.”

David describes one of the first jobs the company did was to create a machine to vibrate insect muscles, he explains: “It sounds a ridiculous thing, but, a professor at Oxford wanted to characterise the force characteristics of insect leg muscles, both under high pressure and at various frequencies.  We built an enormous stainless steel machine.  All the electronics for waggling the leg muscle up and down were valve controlled then.  It was, quite an engineering feat just to make the electronics.”

Everyone worked set hours a week but there was as always the search for that ‘elusive money-spinning’ idea. David says: “Newmarket Transistors, part of the Pye Group, used to give us transistors by the bucket-load, just to try and get them put into equipment.  There was a lot of change to the way things were done, which was miniaturising electronics.”

The company bursting out of its initial premises had funding from Robert Maxwell inter alia and built new premises at Bar Hill which were opened in 1968 by George Brown, Deputy Leader of the Labour Party,

In his twelve years with Cambridge Consultants, David says that one of the most memorable achievements was the design of a computer-controlled loom to produce multi coloured carpet. He explains: “That was a fun project.  Carpets are conventionally produced very slowly if they are patterned – as with Axminster or Wilton carpets, or they are tufted which is rapid but limited to plain colours. The approach that I thought of was to bring all the colours of wool, eight colours typically, into one rotary head, and with a puff of air, to pull on one or other of these strands, to shear off the bit of wool that is puffed out, and then to transfer that pneumatically to a glue surface. This worked quite well.” The final project saw a yard wide machine built in conjunction with Durham Carpets, who were trying to move away from the conventional Wilton or Axminster approach. David continues: “The normal cheap carpets are tufted carpets, where if there’s a pattern on it, it’s just printed afterwards, and it’s not very satisfactory.  Axminster and Wilton processes are just very slow, because, they were dating back to the 1800s, so we were trying to look for a process that would be fast and computer linked.”

By 1971 Cambridge Consultants was in financial difficulty. They had established an umbrella company; Aim Associates to try to protect the company from any shortcomings experienced by the numerous smaller companies under its wing, including; Cambridge Audio, AIM BioSciences, AIM Electronics, AIM Physical Sciences, DraftMaster systems, Durcam Carpets, some of which were struggling financially. Eventually, the bank withdrew the company’s overdraft facility and the company was sold to Arthur D Little, a Boston-based consulting company.

David left Cambridge Consultants in 1971 to form a top of the range hi fi company -Lecson Audio .. In 1974 it won a Design Council award for its amplifier.

When Lecson Audio was subsequently taken over by a banker in the City, David moved to the Cambridge Instrument Company in Melbourn where he joined a team working on a machine to automatically analyse blood for Addenbrookes Hospital.

In 1977 David then moved to join Sinclair Research which had to been set up with to exploit an idea that Clive Sinclair had for a flat tube cathode ray tube and was a new company as opposed to Sinclair Radionics which produced calculators and hi fi . “The NRDC just about on board, and it was my job to work on this, and get the project off the ground; it was a tremendous job.” David designed the flat cathode-ray tube which was produced by Timex when it went into full scale production. He also designed a Microdrive for Sinclair computers and the printer for the ZX81.

David says: “I enjoyed life a lot at Sinclair’s. I think it was partly the change in working for a company where there was a prodigious turnover per employee. We were doing a million pounds per employee then; it was very successful.”

In 1986, David moved to Harlow as Technical Director and co-founder of Image Displays. He explains: “I was following up this beautiful quality display that STC had been working on.  It did have the defect that it required a high voltage drive, but it had a memory. I had always envisaged it to be something like the Kindle; I mean that was a different voltage technology that’s been hugely successful.  We started making demonstrators.”  Unfortunately, the project failed as David and his co-founders discovered that it was just too capital intensive to start an LCD manufacturing plant from scratch.

In 1989, David decided to set up his own consultancy which he ran for the next few years until retirement.

On the success of Cambridge phenomena

David says: “I think, we had a lot of people through our hands, very clever people.  They have seen that, actually, it’s quite easy to set up and run your own business and I think that’s the way it’s been, it spawned.”

David says the lesson he learned from his experience was: “I should have insisted on a growth that was slower and more profitable, rather than go for expansion at the expense of profits.”

David says: “They always say it takes seven years to grow a business, and I think that’s probably true.

Interviewed by: Richard Sharpe on the 17th April 2019 at the London offices of BCS