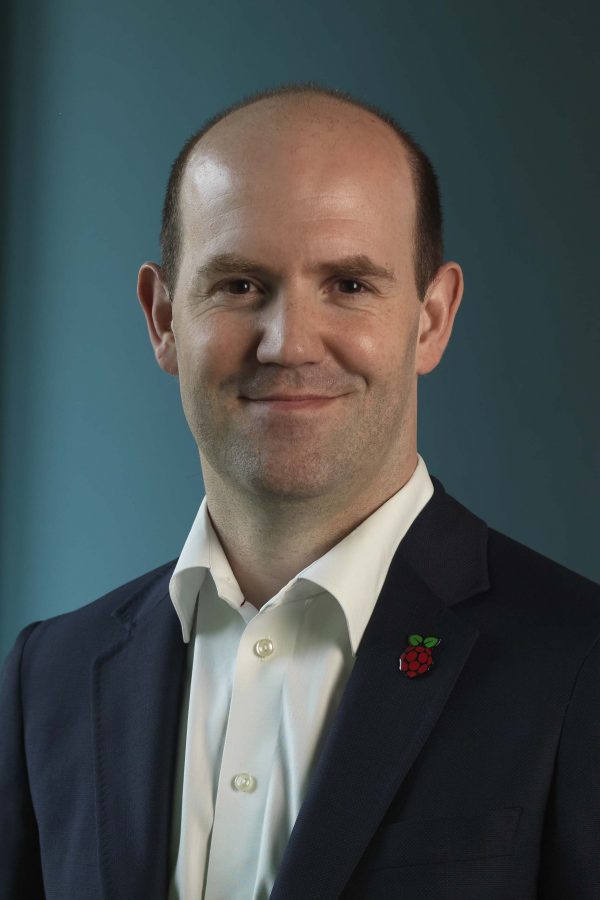 Eben Upton CBE is a British technical director and ASIC architect for Broadcom. He is also a founder and former trustee of the Raspberry Pi Foundation, and now CEO of Raspberry Pi (Trading) Ltd., the wholly owned subsidiary which runs the engineering and trading activities of the Foundation. He is responsible for the overall software and hardware architecture of the Raspberry Pi device.

Eben was born in 1978 in Griffithstown, South Wales (home to his mother’s family) but he lived there for only eight weeks before his parents took him to Lae, the second largest city in Papua New Guinea where he lived until he was two and a half. Eben’s parents were both English language teachers and his father secured a teaching post at the University of Technology in Lae: it afforded an opportunity to travel to a very different part of the world. When his parents returned to the UK Eben lived briefly in Leeds, then Selly Oak in Birmingham where his father had a research job for a short period before settling in Ilkley, Yorkshire.

Eben first attended St Edward’s Roman Catholic school in Birmingham and there, aged four, he had his earliest experience of computing, playing a game on a Mini-Computer at the University, where his father worked.

Eben recalls that he learned as much, taught by nuns, in the rigorous, challenging environment of St Edwards as he did in the rest of his primary schooling and appreciates that St Edwards set him off on a solid footing.

Following two terms at St Edwards he moved to Yorkshire and Ashlands Primary School. Eben felt his schooling slowed down when he entered the second year of primary schooling in Yorkshire, but he also recalls it was immense fun. His mother became the main breadwinner as she entered school teaching while his father worked on compiling dictionaries. There were no computers at Ashlands but he does recall reading an Usborne book of computing that included some simple coding using Beginners All-Purpose Symbolic Instruction Code (BASIC).

Appropriate to the era of Star Wars, his childhood interests were more aligned with space rockets, space exploration and LEGO space models than computing.

While at Ashlands, Eben and two other pupils were accelerated from the third to the fourth year in order to balance class sizes. He coped well will the rapid move up and felt that he was being challenged again as he had experienced at St Edwards. However his accelerated progress into the fourth year meant that he completed junior school and entered middle school a year early. However, Eben thrived in his new environment and this theme of accelerated progression was to remain an aspect of his education through to university. He was identified as having special education needs; in his case a need for greater challenge!

In middle school he made contact with computers again, initially through his cousin’s ZX Spectrum and programming a friend’s Acorn Electron (a stripped-down BBC Micro). His school also had a computing lab where he was introduced to the BBC Microcomputer System which was part of the nationwide BBC Computer Literacy Project at the time. As with many school pupils of that era the BBC Micro was the platform on which he first learned to code – his status as a special needs pupil allowed him to stay in at lunchtimes and practice coding on the BBC Micro.

During the school holiday Eben’s mother bought home a Research Machines Nimbus computer for him to learn on; which meant that by the time he returned to school he was quite proficient in BASIC. His coding experience deepened when he got his own BBC Micro around the age of ten and stuck with that until age fifteen when he moved on to a Commodore Amiga. Eben’s fond memories of the BBC Micro later influenced the naming convention for the Raspberry Pi computer (Model A, B, B+).

Eben was offered a place at Cambridge at only 16, having passed A and AS Levels variously in Maths, Further Maths, Physics and Chemistry. His senior school, a comprehensive, had a track record of sending about 5% of its pupils to Oxford or Cambridge, particularly to Trinity Hall. His first contact with Cambridge was an open day at Trinity Hall, but his choice of college was mostly influenced by what he learned from a friend of the quality of the food at St John’s College; a fact he’s not entirely certain the admissions tutors would be pleased to learn now!

Eben was offered a place and left school at 17 but St John’s College would not allow him to enter university until he was 18, so he joined the IBM Warwick Development Group, run by Dr Ian Nussey OBE. Eben describes Ian as a ‘grand old man of British Engineering’ and an excellent line manager during his industrial placement year. Ian made sure that anyone in IBM who took on one of the industrial placement students gave them a real job and ensured they gained valuable. Eben was engaged in REXX and C programming on the OS/2 operating system, which at the time was outselling Windows NT. He also got involved in DB/2 database development.

He struggled in his first year of Physics and Engineering at Cambridge but got his act together in the second year and transitioned to the Electrical and Information Sciences Tripos (EIST). During his third year at Cambridge he founded Ideaworks3D with Graham Sanderson who he met while at an IBM graduate event.  The games development business based in London still exists and employs over 50 people.  Success with Ideaworks3D caused him to defer his fourth and final year of undergraduate studies against the will of the university, but when he returned, he changed track again to do computer science.

Eben subsequently took the Cambridge Diploma in Computing Science, which was the oldest taught computing course in the UK before it ceased in the late 1990s. He attended lectures in the morning and commuted to London to continue working with Ideaworks3D in the afternoon – a brutally demanding workload that he doesn’t remember with affection and caused him to become bored with running Ideaworks3D.

While still at university he worked during the summer and Christmas holidays in Austin, Texas (and remotely) for a company called Interstream, which was co-founded by Graham Sanderson , and another former IBM employee – Steve Denton.

He puts his first commercial success, with Ideaworks3D down to his time with IBM, the people he met and the work he did during the summers and over Christmas for Steve and Graham at Interstream.  However, it was in large part due to the commercial success of Ideaworks3D that he decided not to take a graduate job with IBM.

Eben did well enough in the Computing Diploma that he was able to secure funding to study for a PhD over the next four years and studied compilers. His supervisor was Martin Richards of BCPL fame – a programming language that eventually led to C/C++. Martin subsequently wrote a part of BCPL for the Raspberry Pi thanks to his connection with Eben.

Eben has since returned to Cambridge to complete an MBA at the Judge Business School while working in industry – an experience that was vital to him setting up Raspberry Pi trading.

St John’s and the move to Broadcom

Following his PhD he became Director of Studies at St John’s College (2004-2007), responsible for admissions to the Computing Science TRIPOS. It was at this time he and others noticed the lack of coding skills evident in many applicants to the university – in fact the university was experiencing a drop in both the quantity and quality of candidates.

While still at St John’s College he took a role working for Broadcom (2006-present), a VSLI design company, based in Cambridge, writing software drivers for video and graphics hardware for the low-power VideoCore III multimedia processor.

While Eben was at Broadcom he invented the low-cost bare-bones computer called the Raspberry Pi.  It was initially aimed at school children but later expanded to embrace the hacker community and the developing world market.  This led to another major milestone in his career, setting up the Raspberry Pi Foundation.  Eben is now the CEO of Raspberry Pi Trading.

Lessons from the world of work

Eben believes that good engineers are made (not born) and that there must be a balance between the desire to tinker, to examine, to deconstruct, to build and the need for a solid theoretical foundation through education – it’s not sufficient to learn coding just from taught course material or from self-directed experimentation. He only hires software developers who exhibit this characteristic and it’s one of the reasons why be believes the Raspberry Pi will help develop the next generation of coders.

Eben still counts Ideaworks3D as his proudest business achievements, because it was his first start-up and, with Raspberry Pi the only other start-up that has been an on-going success. Ideaworks3D was founded when Eben was 20 and it has employed 50 people for twenty years: indeed it continues to employ many amazing people today. The happiest time of his professional life so far has been at Broadcom where he worked with a team that developed the VideoCore 3D graphics processor.

Eben’s advice to up coming engineers and technologists is ‘stick with it’. He walked away from challenges earlier in his life when they became too tough and he wishes he hadn’t done that. Raspberry Pi  has been a tough journey but he hasn’t walked away from it – he’s been the most successful when he’s stuck to something and that’s what he hopes others will learn from his experience.

Eben also believes life is also too short to hang out with stupid or unpleasant people, we should all strive to enjoy life and get along, working with the very brightest people we can. This is advice he applies to hiring people at Raspberry Pi, they have to be bright but they also have to be nice people that can get along with others and make for an enjoyable working environment – Eben won’t work with people who are difficult or negative and it’s because of that he finds Raspberry Pi such a pleasant place to work.

Eben was awarded a CBE in the 2016 Birthday Honours list for services to business and education. He also received the Royal Academy of Engineering’s Silver Medal in 2013. In 2012 he was recognised by MIT as one of the world’s top 35 inventors under the age of 35. In 2018 he was elected a Distinguished Fellow of BCS The Chartered Institute for IT – the professional body’s highest award.

Perhaps the biggest challenge and most interesting project of Eben’s life is fatherhood, which was imminent at the time of the interview. He still does a little bit of BBC Micro programming from time to time but recognises that he won’t be able to continue tinkering when children enter his life.

He hopes that in 2050 people will look back on the Raspberry Pi in the same way as they now do the BBC Micro, a pivotal and influential focal point in the development of the industry. He’s hoping the Raspberry Pi will reach 10 million sales which will match that of the Commodore 64, after which it only has the PC and the MAC ahead of it!

Interviewed by: Paul Jagger on the 7th February 2017 at the offices of Raspberry Pi