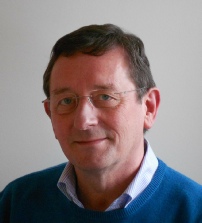 Gareth started his career in IT at what was then known as the Driver and Vehicle Licensing Centre, in 1973.  He was later influential in developing the services offered by the government’s Central Computing and Telecommunications Agency.  He then became a partner at Ernst & Young and a vice-president at Capgemini before setting up his own company to offer training in communication and leadership.

Gareth was born in Leeds in 1952.  His father was Dean of the Faculty of Science at Leeds University and his mother was an English teacher, so influences at home included both analytical skills and the arts, particularly literature and music.  He learned piano from the age of five.

Gareth spent the first few years of his early education at a good school in Leeds, Talbot Road, but when the family moved to Harrogate his parents, unimpressed with his new school, sent him to a prep school, from where he won a scholarship to a private secondary school in Harrogate.  He did not excel at O level but did better at A level, where he took Maths, Physics, Chemistry and General Studies.   He learned to play the violin, eventually being asked to play for the Harrogate String Orchestra; he was also a prize-winning chorister.

After struggling to decide between arts and sciences, Gareth went to Nottingham University to read civil engineering, which he hated, and in retrospect sees as a mistake. He almost changed course to philosophy and psychology but was dissuaded by his father.  He took his second year twice but did not complete his degree.  Meanwhile he became very involved in drama, writing, directing producing and performing. Two plays in particular stood out – Much Ado About Nothing, and Zoo Story.

Gareth joined Leeds City Engineers as a trainee in 1972, which coincided with a major reorganisation of local government, so he spent much of his time manually colour coding maps for strategic planning exercises.  There were no computers and, apart from some tinkering with radios his only experience of electronics and computing by then was in stress analysis for bridge design.

With encouragement from his father, Gareth applied for a job in automatic data processing (ADP) in the civil service.  Having passed the aptitude test he wanted to work in the Department of Environment, or in Cheltenham, but was sent to Swansea, to the newly formed DVLC in 1973.  Driver and vehicle licensing was moving out of individual local authorities to single centralised systems in Swansea with completely new technology.  He considers this a very courageous and far sighted approach by government at the time.   The systems were still being built and he started in a technical service area between application building and operations, after an intensive thirteen week training course.

Gareth observed that the system in place was very wasteful of magnetic tape because writing to the tape had to be cut prematurely if a driver name on the database was duplicated.  He successfully designed a software intervention that addressed this problem but his boss at the time was unappreciative – criticising him for encroaching on another people’s areas of work!  Nevertheless, this is still an achievement he is particularly proud of.

One thing he noticed was that people who had done computer science or engineering had less aptitude for this work than those coming from unrelated subjects like zoology or archaeology – the latter had more of the necessary creativity.  He feels that the current distinction between arts and sciences is unnecessary; people can be highly skilled across multiple disciplines. His father; scientific, musical and a skilled cabinet maker, demonstrated this.

Gareth rejected the opportunity offered for career development from the Civil Service Fast Stream on principle, preferring to see merit rewarded at every level rather than segregating a chosen elite for special treatment.  However, after a period running system simulations on SCERT, he took an opportunity offered by the CCA (Central Computer Agency – later CCTA when Telecoms were added) in the field of hardware monitoring and system simulation.  This also gave him the opportunity for an early promotion to Higher Executive Officer – without having to wait the standard seven years.

At the time the CCA had responsibility for funding and procurement of all government computing.  Over time this was delegated to Departments and the role became more strategic and advisory.   He thoroughly enjoyed his time there:  there was freedom to develop and apply new ideas such as SSADM (Structured System Analysis and Design Method).  Methodologies and guidance like Prince, IT infrastructure Library and GOSIP meant that the CCTA enabled Government to show real leadership in deployment of IT in the UK and abroad – a major achievement.

While working at CCTA on hardware monitoring and systems simulation Gareth reached a key turning point when offered an opportunity, which he took, to join their consultancy service.  He then provided support in administration, scheduling and supervising engagements for private sector consultants loaned to CCTA and deployed in Government.  Much of this work was undertaking project reviews, especially when large projects got into difficulty, and also IT strategies. One of Gareth’s roles was editing consultants ‘reports. He asked for the opportunity to conduct consultancy engagements himself and this was granted. He became the first civil servant to take on the role of consultant in the Strategic Advisory Consultancy Service. It was stressful with around thirteen projects a year, all over the country for six to eight weeks at a time.  Two particular projects stood out, firstly a requirements analysis for the Hospitals for the Criminally Insane, and secondly at the Natural History Museum.

Gareth was also on the steering committee for the Naval IT Strategy, affectionately known as NITS.  This, plus a strong feeling that there were no real strategies for IT in Government at the time and an absence of methodology for generating them, led to him becoming head of the IS Strategy Unit at CCTA. He had two objectives, firstly to develop comprehensive guidance on developing an IT strategy and secondly to provide guidance to departmental steering committees, who were responsible for monitoring and evaluating IT projects without having an in-depth knowledge of IT.   With the help of a colleague he produced, in thirteen weeks, the guidance publication for Steering Committee members (Guidelines for Directing IS Strategy).  In parallel, he was responsible for the production of detailed guidance on IS strategy planning. This was published by John Wiley. Although it was produced in 1989 this is still used in major universities on computer science courses.  He ranks it as one of his major achievements and his only regret is that the Guidelines document was printed locally and does not therefore have an ISBN number.

By the time he had published the guide he was ready to move out of the civil service, primarily for financial reasons, but he was persuaded by his boss to stay on another nine months on a higher pay grade, to head up a new Strategic Issues Group, which included, as well as the IS Strategy Unit,  computer and office systems planning and campaigns like Women int IT.  He had to ensure government adopted the new strategic planning approach and persuade the consultantcy firms to conform to this approach.

Gareth had a number of offers but moved to Ernst & Young in 1990 where he joined their public services team as a managing consultant, rapidly getting promoted when his boss moved on, and then becoming in Partner in 2004.  Initially, he led the company’s consultancy on public sector information systems.   At this time government was creating executive agencies to provide administrative functions, leaving departments to focus on policy.  Information systems strategies were needed to allow freedom of operation within a standardised approach.  Having been involved in this with CCTA, Gareth won a major bid to DSS.

Gareth’s team won an even more important bid to DSS later. The Public Services practice leader had determined that they frequently lost bids at presentation stage, so he, along with the rest of the practice, attended a course run by William Macnair which taught presentation design and delivery skills using a method called the Kipper, a tool for the design and delivery of spoken word messages. Gareth implemented what he had learned immediately on this very significant framework bid – and won the bid.  He has since strongly advocated the importance of message design skills in communicating ideas effectively.

Gareth’s work then moved into programme management, after winning an engagement for CCTA initially called Business Area Planning.  This was concerned with fitting methods, management, IS strategy and technical projects together coherently.  He coined the definition of programme management “A set of related projects and activities constituted to achieve a particular business outcome”.  This was a completely new concept at the time.  The large consultancies all subsequently developed programme management tools. E&Y’s approach, Navigator, was top down, working from business objectives, and was much more successful than those derived from data management.   CCTA had also evolved their own methodology – Managing successful Programmes – MSP – which ensured consultants and contractors used the same standards and approaches but had freedom in choice of tools.

In the 90’s Gareth led a significant programme of work for the Department of Transport to sort out IT and systems issues arising from privatisation of the railways. In 1997 he set up a Transport and Travel consultancy operation in E&Y, building it from scratch. When E&Y sold its consultancy business to Capgemini in 2001 Gareth also moved to Capgemini where he continued to lead a very successful transport and business services consulting and IT practice.  He took over the Public Sector business of Capgemini in 2003. He learned some important life lessons about business development – that winning is not everything, that external factors, like politics, can affect the outcome, and that long-term growth is more important than short term success.

Gareth was also very active within Intellect, especially in the work of the Public Sector Council, a group of competitors cooperating to improve government IT – a significant achievement.  They developed guidance on roles and responsibilities, and a code of conduct for suppliers.

Gareth counts his work in strategic planning and programme management among his achievements.  He is also proud of his success at winning government projects, sustaining long term business growth and resisting the short-termism that frequently creeps into companies.  This is particularly important because government business is very much based on reputation.   He also co-designed and rolled out a very successful training course with William Macnair to improve presentation and communication skills within the organisation (based on Macnair’s original Kipper concept), a contribution he is proud of. He believes in looking after his staff and that good teams are made up of diverse individuals.

After leaving Cap Gemini in 2007 Gareth set up his own company and moved into bid coaching and training. He has helped many teams successfully win tenders.  He runs a training programme called Being a Compelling Consultant and stresses that what he does is much more than training.  He continues to be fascinated by rhetoric and message design, which he sees as a perfect blend of engineering and language.  Back at school he had always been torn between arts and science, so he finds this combination of creativity and structure very rewarding.

Although the demands of consultancy did not allow Gareth to continue his theatrical career, he sees presentation of ideas as a performance, so his theatre background has proved very helpful.

Challenges for the Industry

Gareth thinks that one of the major challenges to consultants in the industry is complexity, and the large number of potential solutions available, which makes it hard to advise with certainty.  He also urges those entering the profession to plan their careers and decide whether to be technology specialists or, ultimately, trusted advisors and to understand the benefits and shortcomings of each choice.

Interviewed By: Ian Symonds at the WCIT Hall on the 10th December 2018