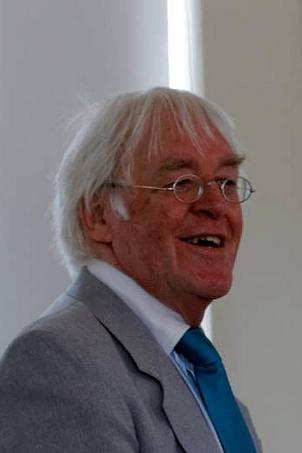 “I nurtured three generations of the best computer talent in the UK (Elliotts, Computer Technology, inMOS)”

Iann Barron designed a computer at Elliott’s for the RAF. He left to form his own company, CT, in 1965 and raised private capital to fund it, one of the first to do so in the world. He was forced out of CT in 1975 and after a spell as a consultant joined the InMos venture of the National Enterprise Board designing the transputer microprocessor.

Iann Barron describes his childhood as fairly ordinary.  His father was in the book industry. His interest in Information Technology began when he was about sixteen or seventeen when he read an article on computers – he knew then that this was the future.    Iann then read a book by Douglas Hartree about computing, and from this he designed his own computer

Iann Barron attended University College School in Hampstead, a public day school. At the age of eight he decided he was going to be a mathematician and go to Cambridge. During his time at university he attended lectures in classics and other subjects, rather than maths, as he was interested in advanced maths and logic, but didn’t like the practical aspects. He went to the Mathematical Laboratory colloquia where all the great people in computing from around the world gave lectures, which he found to be inspirational. He says university was a split world at that time, as he went before National Service, but many undergraduates went afterwards, so there was a considerable difference in maturity and the life experiences amongst his university peers.

Between school and university, Iann Barron went to work at Elliott’s, an electronics company based in Borehamwood, which was developing computers. There he learned to program. The first computer he worked on was Nicholas, probably the only computer ever to be made out of wood. During his university vacations, Iann went back to Elliotts, eventually designing a complete computer which became the Elliott 802 and then the Elliott 803.

Instead of doing National Service (1958 – 1961), Iann was seconded to the Army Operational Research Group, from there to the Air Ministry, then Fighter Command and he finished up in Bomber Command. The original aim was to develop computer war games, but that was a challenge beyond the computers of the time.

In 1961, Iann returned to Elliotts with the intention of setting up a group to research the software of computers. Instead he ended up developing a high-performance computer, the Elliot 502 for the Royal Radar Establishment. His next task was to design a high performance computer using tunnel diodes – a “marvelous technology” that was incredibly fast and totally unreliable.

There was an awareness at the time that automation was going to be the future – computers embedded in everything.

In 1965, Iann Barron left Elliott’s taking six associates with him to start Computer Technology. He took just six weeks to raise the finance for the company – one of the first privately financed science companies in the country. The money was raised from two individuals – Robert Maxwell, the media proprietor – who believed computers were going to revolutionise publishing and printing, and Arnaud de Vitry, the wealthy scion of a French family. De Vitry had set up American Research and Development (ARD) , the first venture capital company, and had made the seed investment in Digital Equipment Corporation (DEC) . Iann wanted to design a computer using integrated circuits which had recently become available, and which he thought were a game changer for the computer industry. The Modular One was the fastest minicomputer of its era, with the best telecommunications; it could have multiple processors, and be assembled in a wide range of configurations.

He recruited new graduates who knew nothing about the world, but everything about computing.

In 1975, Iann Barron was forced out of Computer Technology and became a consultant. Intel had produced the first microprocessor the 4004, and Iann could see that this was the future and it was going to change the world. He set out to become the “world expert in microprocessors”, advising Motorola, Texas Instruments and Fairchild and also telling Intel what was wrong with their
microprocessors.

In October 1978 Dick Petritz, who had started Mostek and had previously been technical director of Texas Instruments, asked Iann to join a new startup and to be responsible for the microprocessor business. Iann said that he did not want to work in the US, and Petritz said he could have his part of the company in the UK, if he could raise the money. To Petritz’s surprise Iann raised the money for the new company through the National Enterprise Board which provided £50 million.

inMOS’ first product was a 16K static RAM memory which was the highest performance device of its time and became the industry standard, taking 60 per cent of the most profitable semiconductor market. Meanwhile the UK company was developing the transputer, which was released in 1984.  The transputer was the fastest microprocessor of its era, and was designed to support parallel processing using arrays of transputers; it was also the first microprocessor to use MOS technology, which became the industry standard. inMOS also developed Occam – a unique programming language which provided explicit control of parallelism.

In his original business plan Iann had forecast that inMOS would make losses until 1984 and then become profitable. In 1984, they had revenues of £150 million with a profit of over £14 million,
both better than plan. At that point, the original business plan had projected a refinancing to provide more money to expand manufacturing and product development. Unfortunately, Mrs Thatcher was vehemently opposed to inMOS “the company started by Tony Benn” and it was abruptly sold to Thorn-EMI, which did not have the resources to fund the company. As a result there was inadequate investment in new products and production capacity, and the company became increasingly uncompetitive. In 1989. inMOS was sold to the French-Italian semiconductor
company ST Microelectronics and Iann left.

Iann’s last business venture was to become Chairman of Division, a company started by ex inMOS employees. Division developed virtual reality hardware and software and was eventually sold to Parametric Technology in 1999.

Chris Strachey, at NRDC, at Cambridge, and at the Programming Research Group in Oxford, for his ideas

David Wheeler, the quiet genius at Cambridge and Iann’s inspiration

Arnaud de Vitry, who backed Computer Technology and advised Iann to use the top solicitors (Slaughter and May), the top accountants (Peat, Marwick, Mitchell) and to buy an IBM golf ball
typewriter for image.

Sir Leslie Murphy of the NEB who, after an hour’s presentation, told Iann he would back inMOS, if he could produce a credible business plan.

Designing a commercial computer before the age of 21

Creating the transputer – a concept which is not yet understood

To be successful, you must have real ability, work very hard and be damned lucky.

Be decisive –the decisions to start both Computer Technology and inMOS were taken within an hour of the opportunity arising.

Iann describes the IT industry as “a) wonderful and b) tragic. Most of the industry uses 1960s concepts. The systems are unreliable, full of bugs and insecure.

In the UK the problem has always been the same – you can get money for new ideas, but the secondary funding to exploit success is really hard to come by.

When inMOS started, it was necessary to build a manufacturing facility, now there are semiconductor manufacturers around the world who will make your product for you, which makes
the logistics of competing at the silicon system level much easier.

Microprocessors are now everywhere from cars to lightbulbs. the ability to program and create systems is fundamental to every manufacturing and service industry we have. This is a great opportunity for the IT industry and for the UK.

Be concise
Recruit the best graduates – set them impossible tasks, and they will succeed

You will never have enough information to make the right decision – so you must work to make your decision right.

Interviewed by: Simon Quicke at the  WCIT on the 22nd October 2016