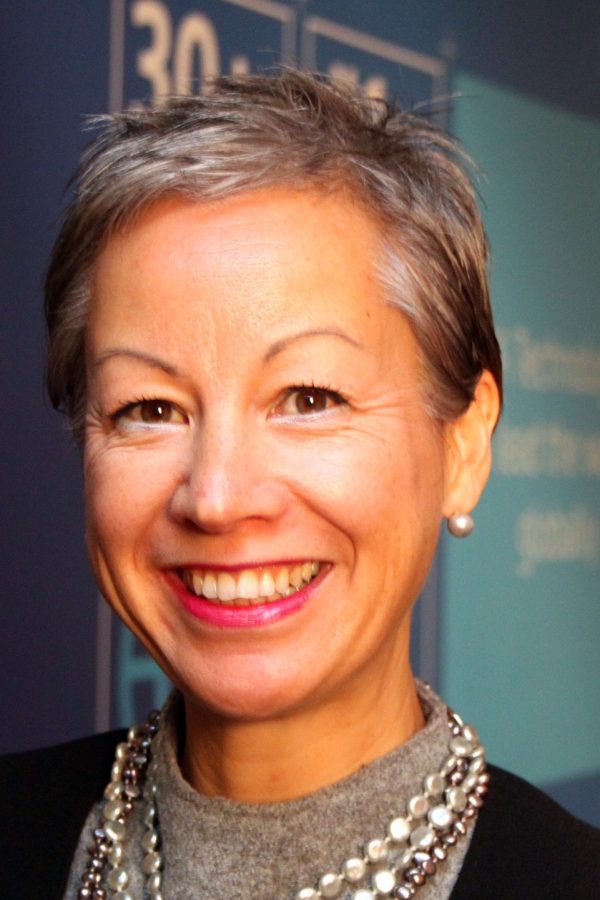 “You are a role model whether you choose to be or not, your behaviours are copied, good or bad”

“For me it’s important to know what failure looks like, after all, success is always on the other side of fear”

Jacqueline de Rojas is half Chinese and was born in Folkestone in Kent. She says she and her brother who is eighteen months older had a really challenged childhood. Her Chinese father was a wife-batterer, drank too much, tax-evader and bigamist and her mother had a black eye every week.  She spent her childhood “trying to be invisible”.

After eight years they ran away to Swindon, which is where her mother lived with her parents, and she remarried a Yorkshire man. They started to live a more normal life.

Her stepfather was insecure, had low aspirations and suffered from low self worth. In contrast, she was bright and interested in learning and she found solace there as she loved the structure and security it provided. However, the time came when she wanted more freedom so she went to the school  library and met the careers teacher, Mr Ryan and found a degree course as far away as she could imagine: She loved languages and so Germany or France were the options. Reims, the champagne region of France looked really attractive so she ticked that box.  But she was asked, ‘If you didn’t get the French option, would you at all be prepared to go to Germany?’  So she ticked that option as well and as it turned out, she got a place on the German option and off she went to Reutlingen in South Germany. The opportunity to be with 60 other students, 20 from Germany, 20 from France, 20 from the UK, was a fantastic lesson in cultural collaboration and tolerance, and a fabulous way to open her eyes to possibility.

She wasn’t sure what to expect and even though she was in Germany, somehow, she hadn’t expected every lecture to be in German! It didn’t really matter, after about four weeks she was completely fluent.

Jacqueline’s first job was a generous offer from her brother-in-law who ran a technology recruitment company.  She was placing tech people with tech skills in to tech firms in the AS/400 market.  After two years she went to work for her largest client, called Synon to manage their German distributor network. Synon, a British-based tech firm, was ultimately bought by Sterling Software and that’s how she got into tech.

Julian David, the CEO of techUK  called Jacqueline and asked her and her business to join the trade body and lend her voice to that of the trade body. ‘Absolutely not’ was her response, she simply didn’t have the time – way too busy as a software exec.  But Julian was persistent and she went along to experience her first techUK board, and said, ‘I think this is the wrong place for me.’  She felt it was not the right environment for her, that they could do anything of note to change the things that she was passionate about.  And Julian said, ‘Ok, well you could be part of that change.’  And that was the start of a really interesting partnership. She joined the board, decided that she would champion the cause for diversity and inclusion, starting with women.  When she looked out at the market, there was a ton of stuff that goes on to promote diversity, but it’s all very disjointed.  The plan back then was to bring it all together and so techUK’s Women In tech Council became an umbrella group that would help women navigate opportunities and leverage the extensive network offered by the membership.

Together with the team at techUK, a manifesto for diversity was created:

The first of which is, how to get young girls interested in STEM or STEAM subjects, including the arts now? Next is how to challenge business to do more?  For example, how to get big and small businesses to really put diversity at the heart of their recruitment and their retention strategies?  Third to create policies and poke Government in the eye about diversity and diverse conditions for change.  And finally, how to get more women into leadership positions both executive and non-executive?

Things are going well and Jacqueline has recruited other board members to help her on her journey.  They have created, for example, a returners’ hub, so women returners, actually parents, returning parents, can use the techUK website and they can see all the companies across the country who have returner programmes

She is now President of techUK until July 2018, and thinks that together they have made a big difference, and is grateful for the opportunity.

Jacqueline was on the Prince’s Trust committee for about nearly eight years but has recently stepped off that to do other things.  She could see how easy it was for kids to have a disagreement with parents, and then start sofa-surfing, and suddenly, really quickly, find themselves homeless.

What they did in tech was that, realising they were a wealthy sector of industry, they felt we could tap into the generosity gene that plays into technology leaders.  And so she spent a huge amount of time fundraising, to give vulnerable kids the time, mentoring and funding to start their own business, or to get back into the world of work, which might mean with a suit, or interview coaching, or it might mean just confidence, and mentoring.  She believes that with mentoring, you get more out of it by giving it than receiving it.

She is a member of the 30% Club which aims and has got very close to getting 30 per cent of women into tech and into leadership positions.  They are really committed to making that happen. Statistically, one woman on the board of a business can reduce the risk of bankruptcy by 20 per cent.  And that percentage increases the more diverse a board you have.  So they are starting with women, but Jacqueline is a big advocate of diversity in all its forms.

Jacqueline works a lot judging different competitions, one was with The Girls’ Day School Trust where they had eleven-year-old girls who were building apps.  One of them had built an app which looked at teenage pregnancy and she built a game to gamify the levels of misery you get to.  It was all about turning girls off pregnancy which she found fascinating.  Another app which the girls had built was to show their parents how much time they had spent on Facebook instead of with them.

She is judging things all the time, engaging and being present with what’s going on down at grassroots, is very important.  She does the Little BIG Awards where thousands of schools enter a competition every year, building apps, and they are judged, and then they shine a light on that., and, it’s called the Little BIG Awards, which is fantastic.

There was one obstacle where Jacqueline was up against a male colleague for a UK country position, she had tons more experience and responsibility, had looked after 100s of people with $100s of revenue, and she was up against someone who had ten people reporting to them and, $10 million of revenue.  He got the job.  And she was told, ‘You know, we simply don’t have women on the leadership team.’  And that was quite hard to hear.

But because it meant that that door was clearly and firmly shut she realised she didn’t have to try there anymore and went on to become managing director of another company.  She thinks that whether you’re male or female, you can experience imbalance and unfairness

Jacqueline thinks the scariest moment for her on her journey, was when she got her first role as managing director.  She sat in an oak-lined room that had a bar in it and an oak table, and with someone outside who was looking after her and thought, what on earth, does a managing director do?

So, she decided that she was going to just say no to every second request and she earned the reputation that she didn’t say yes to anything.  That forced her into a world where questioning became her biggest weapon.  Meaning she asked questions about everything, and stopped trying to know things and that was when she felt very free and very competent.  She feels that learning the ability to question as a way of coping with your own fears of inadequacy, makes you interested versus interesting.  And that has been a big “light bulb” moment for her.

Jacqueline feels very strongly that with the pace of technology and innovation, in a world which is moving this fast, that collaboration is going to be at a premium.  So, in order to be, in order to be able to take advantage of all of these innovations and progress, people will have to work together.  she strongly believes that one plus one equals five in our industry.  And that’s where, you need constituents from all of the markets and audiences that you’re going to touch.  And so community is at the heart of everything that she does, and, and she believes that’s where we need to go as an industry, and as society, to stay connected.

Jacqueline thinks that her role as President of techUK has really given her a platform to be able to influence what happens for most women and people that she can help in a diverse spectrum.  That platform has really helped propel the opportunity for this country to be more inclusive.

In business, on the good side, she is really grateful that she had the opportunity to learn about branding.  And when she learnt to brand herself as a trouble-shooter, and used LinkedIn to describe that.  She has never really looked for a job.  People have come looking for her through her building relationships, and using social media.

Jacqueline was hugely embarrassed and humbled when she was named as the most influential woman in tech by Computer Weekly. She herself still battles with low-self worth. But she does encourage and applaud award-giving because, shining a light on achievements and diversity, and people who have worked hard and made a difference, is important, she feels that acknowledgement is right at the top of the tree in terms of what we need as humans.  And also, it encourages people to join the technology industry, because it’s fun.

Jacqueline decided she needed to find her own way to operate in the tech world, and that was through diplomacy, through being smarter, creating teams that could collaborate, creating teams that would consultatively listen to the customer, rather than show up and throw up about the tech.  And it worked well so it is important to find your own way.  To stand your ground, and to deserve the space that you command.  To be present in the room.

Jacqueline is a big believer in reframing anything bad that’s happened to her and turning it to her advantage.  So, even when she has had ‘we don’t have women on the leadership team’ kind of comments come at her, she has always re-framed those as opportunities

Interviewed by: Kerri Mansfield on the 20th June 2017 at BCS London Office