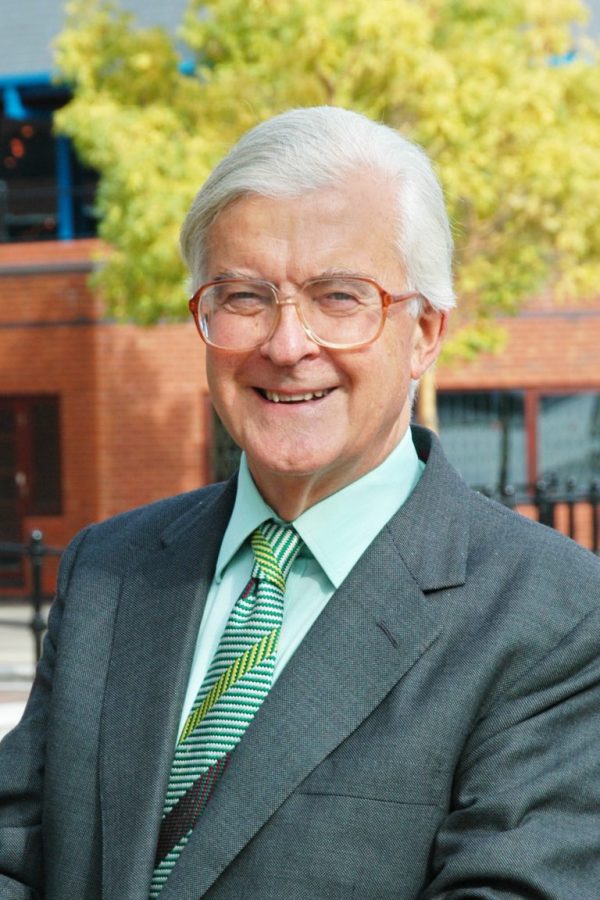 “I started, in 1982, Information Technology Year, trying to show to the country that Information Technology was going to shape the future and IT was the beginning of advanced telephony, it was the use of computers in schools, it was the use of computers in offices.  Now, today in the Fourth Industrial Revolution it’s going to happen in spades, in all sorts of ways, it’s going to change our society and society has to deal with that.”

“I have developed over the past ten years a new type of college called University Technical College, three state schools from 8.30 – 5.00 every day, with youngsters doing technical subjects two days a week alongside academic subjects.  They are the people who are going to find jobs in the Fourth Industrial Revolution.”

Lord Baker was born in Newport, which was at that time part of Monmouthshire. His father was a civil servant and wanted Lord Baker to do the same.

Due to being evacuated, Lord Baker sat the eleven plus twice! He attended Hampton Grammar school for three years, where he was very happy. However, his father was a great believer in education being the ladder up which you climbed in life, and so Lord Baker was put in to attend St Pauls, where he spent the next four years.

From St Paul’s Lord Baker went into National Service, he spent two years in the army as a gunner, where he became an officer and an artillery instructor.  During this time he was posted to Egypt and Libya.

The first in his family to attend university, Lord Baker attended Magdalen College, Oxford, where he read history.

Upon leaving university in 1958, Lord Baker started working for Shell, who were paying graduates £750 per year, which in those days you could live grandly on!

Working in economics, he learnt a great deal but grew bored and decided it wasn’t for him.

Lord Baker gained further experience in his next role working as the assistant to Gerald Abrahams, Chairman of Aquascutum, where he learnt a lot about running businesses and budget control during his 2 years.

From there he went on to work as assistant to the chairman of Minister Trust, Peter Cannon, who invested in companies and ‘pulled them around’. After a time Lord Baker was made Chief Executive of a clothing company Minister Trust had invested in, he loved being an active manager and learnt a lot from Marks & Spencers, whom they were supplying, on how to run a really good company.

Lord Baker took an early interest in politics as he grew aware of and more interested in public events after the war. He remembers a history teacher at St Pauls who encouraged students to start reading newspapers and seeing what was happening in the world, which he did.

He kept interest in politics and was secretary of the Oxford Union during his studies at Oxford, and President of the Oxford Tories.  For a time, Lord Baker was a local councillor in Twickenham. In 1964, he fought an election as Conservative candidate in the seat of Poplar, which was in those days, how to one got started in politics as a Conservative.

Lord Baker became MP for Acton when won he won the 1968 by-election, he was supported by his patron Peter Cannon in moving away from business and into politics.

As an MP Lord Baker took an interest in data security and data information, he had a hand in introducing a bill in the houses of parliament as a backbench MP, on data security and the right of citizens to have access for information. He had a lot of help from IBM, who were the big company of the day, in drafting the bill.

In the 1970s Lord Baker became a small shareholder in the software company Logica, where he got to know the people running it, particularly Philip Hughes. Logica were one of the first breakthroughs in software, as he began to realise what software was, Lord Baker got into it more and more, and he says that her learnt a lot from Logica.

In 1972 he was appointed personal Junior Minister to Ted Heath, who was then the Minister for the Civil Service. Responsible for the purchase of computing, Lord Baker was in charge of the stationery office and the Central Office of Information, where he worked with civil Servant Reay Atkinson to find equipment that would help government to automate more, this further stimulated his interest in computing.

In 1974 the Conservative party lost the election, and throughout the 70’s Lord Baker was very much involved in the early stages of computing, where he began to learn through Logica how important computing was going to be and how important software was.

In 1981 Margaret Thatcher was persuaded by Lord Baker to visit Logica’s Headquarters. He had devised a 10-point programme, which he shared with the then Prime Minister, covering goals such as introduction of computing in schools, fibre optic technology, early robotics and moving towards a paperless office. He also suggested that there should be a Minister of Information Technology, to which Lord Baker was the first to be appointed in January 1981!

Lord Baker spent four years as Minister for IT where he could see that in order to advance government had to be active and had to be within industry to really persuade people that these advances were the future. He feels that the sheer momentum that he tried to create was very important to this, and that the most important and enduring things he did during that time were the privatisation of BT and getting computers into schools.

He recalls that the privatisation of BT required an enormous amount of effort and personal commitment because there were so many people saying “you shouldn’t do it.”  The unions were forming up against privatisation, and there were lots of Conservatives who said, “don’t be silly, who’ll buy shares in telephones.” But Lord Baker felt he just had to press ahead and know that he was on the right course, and in doing so he also created the cable industry.

To get a computer into every school in the country was also a tremendous success and was the beginning of a long road.  Some schools used just used their computer for administration, others used it as a teaching tool, but Lord Baker felt that it meant that you could begin to say to youngsters ‘this is important.’  He was also responsible for the reconstruction of the British computer company, ICL.

During his time as Minister of IT Lord Baker was involved in the Alvey Project, an attempt to match fifth generation developments in Japan, which concentrated on very large-scale integration, on artificial intelligence, software engineering, and parallel processing.

The Alvey project worked with various UK companies such as Inmos, Logica, Insac, Ferranti, and Standard Telephone and Cables trying to facilitate their development. Alvey itself has been severely criticised for putting into the public domain technologies which others could exploit, but Lord Baker feels this was not entirely the fault of Alvey.

In 1981 Lord Baker visited an extraordinary information technology centre under the bridges of the railways in Notting Hill, which was training predominantly black youngsters who’d left school with no qualifications, in computing.

He saw that these young people were turned on totally by this training, because of the fact they could access music through computing.  At a time of depression and rising unemployment for the UK Lord Baker persuaded Keith Joseph to re-create the information technology centres across the country, setting up a whole network of ITeCs, as they were called. Lord Baker realised that he was recycling young people who’d failed at school and using technology to do it, and so he became totally convinced that computers were a way to help young people significantly.

Lord Baker continued to push to get more computers and computerisation into schools. He had the idea to set up technology schools independent of local authorities, which would be computer-based with lots of computer technology in them.  This became part of the Conservative manifesto of 1986, however when Lord Baker went to companies like ICI and Rolls-Royce and the water companies and asked for a financial support, they all said no, ‘this is a job government has got to do, we don’t want to spend our money doing that’.  He then turned to entrepreneurs and raised £44 million and sixteen City Technical Colleges.  Lord Baker was able to get one or two of them off ground straightaway, the first one was in Solihull, which still exists and he says is still one of the best schools in the country.  In all there were 16 CTCs.  Lord Baker also introduced the National Curriculum.

Thoughts for the Future

Lord Baker anticipates that the fourth industrial revolution is going to change everything.  He has always argued in the past, that we should embrace new technology because it will create more jobs than it destroys.  He is now quite sure that the fourth industrial revolution will not do that.  The capacity to destroy jobs, artificial intelligence i.e. robots, driverless vehicles, massive computerisation and big data will change jobs fundamentally.  He feels instead that this change will create different kinds of jobs, which will require more technical skills.

Lord Baker has continued to promote the introduction of new schools such as University Technical Colleges within the conservative government. There are currently 50 University Technical Colleges (UTC) with 14,000 students in England although he feels there should be 300, – which we had in 1945 with Technical Schools, but they were killed because of snobbery. UTCs teach children aged fourteen to eighteen, and for 40% of the week they undertake technical work, including designing things on a computer, using CAD, 3D printers and using lathes, skills Lord Baker feels are necessary.

Lord Baker advocates for giving youngsters leaving school at sixteen or eighteen a range of different skills that are not just academic.  He suggests that experience of working in a team, problem solving, and making and fixing things are important skills to learn which are not currently taught in schools. He feels schools should have more technical, creative, adaptive and imaginative training. He also suggests that all students should take computing science exams at sixteen and learn coding.

Interviewed by: Richard Sharpe at the House of Lords on the 12th July 2018