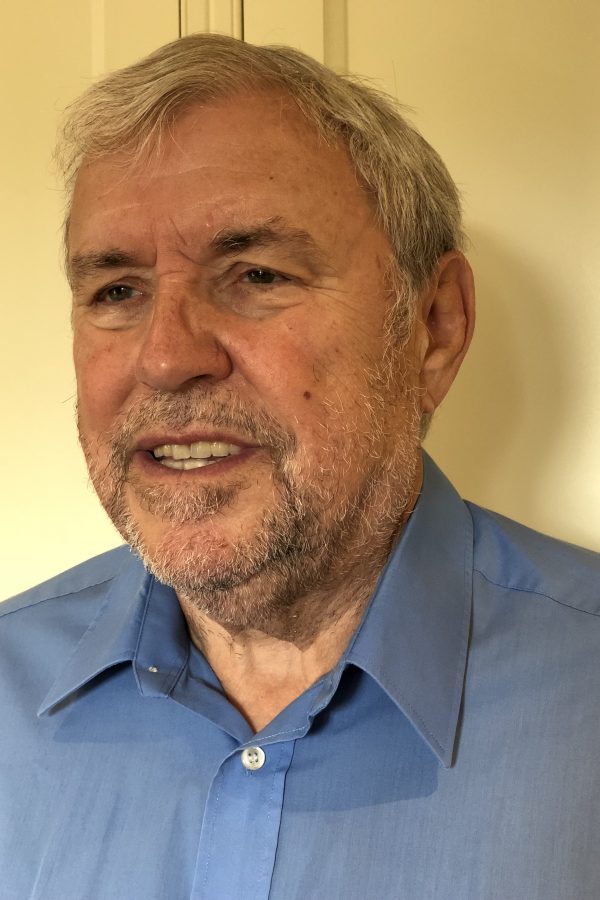 “These are the three things I have learned from my career:

Learning to programme in the Assembler language because it taught me how a computer works and still does.

Sometimes leading the design, development and teaching of a system design method.

Becoming increasingly frustrated at our industrious inability to provide appropriate programming tools for busines persons and not fixing it – this is something I haven’t done.”

Maurice Perks was born in Kidderminster in 1943. He grew up with his father who, after serving in the army in the war, owned a grocery shop, his mother, who was a housewife, and his brother.

Growing up, Maurice liked engineering, mathematics and building things. Having passed his Eleven Plus, Maurice attended King Charles I grammar school in Kidderminster, where he enjoyed a sense of discovery that maths, physics and chemistry gave him, and which led him to concentrate on the sciences.

In 1961, having obtained O and A levels, Maurice decided to work in the laboratory at Brinton Carpets in Kidderminster. He says: “I learnt an awful lot about textiles and laboratory procedures. I was always trying to understand something that didn’t exist. Eventually, I was trying to work out the mathematics of how you match colours and other challenges like that.”

While team members would argue about the colours, Maurice looked for a more scientific way to understand them, he adds: “I always thought that if you measured the spectrums of these things you could work out a lot of mathematical things. It was while looking at this that I realised you couldn’t do this with a tabulating machine or a slide rule; you had to have a computer to do it.  This suddenly pinged something in my mind.  You had to have a processing capability which was far beyond anything that people could do.”

After three years at Brinton Carpets, Maurice went to Aston University to study for a physics degree on a part-time basis. He says: “I began to realise that, if you wanted to do something in the scientific world that I wanted to be in, you had to understand computers.”

In 1967, having gained his BSc in Physics, Maurice left Brinton Carpets. He was offered a number of opportunities including the chance to study for a PhD in Canada and a role by ICL, however, he accepted a role as a systems engineer with IBM and started in 1968. His IBM career started with the company’s 18 months intensive training programme. Maurice was based in IBM’s Nottingham branch which served the retail industry, with customers such as Boots, Great Universal Stores, Players, alongside some process industries including Dunlop and Goodyear.

On the subject of IBM’s approach to business, Maurice says that they took a holistic approach to customers which meant that they did not just believe they offered good or better systems than their competitors but that they also had better systems engineers and better support. He says: “I think IBM was just better in its holistic approach to how it gained business. … The strategy was, in military terms, ‘we will defend what we have, defence is the first.  I think it was just a set of processes with some really good people.”

In 1969, IBM changed its approach and unbundled its software, meaning that customers could rent the hardware and/or the software. Maurice says: “I was actually in the middle of some of that and it was a bit chaotic, because the financial and all sorts of contractual sides of IBM hadn’t worked it out.”

Maurice was working with Dunlop at the time (1970) installing one of the first transaction management systems in the UK, called Customer Information Control System, CICS (by 1971 there were 111 CICS licences in the world). The software had been free when he started the project but became chargeable with IBM’s change of approach.  He adds: “In general, we made the change.  Compilers and the transaction managers et cetera were first and then the operating systems came later.”

At this time IBM launched its next generation of mainframes; the 370, plus a new system call System/3. Maurice says: “It was IBM seeing a market, funding development, and more or less, getting something into that market.”

It was also the time of increased competition for IBM with the introduction of the Amdahl machine which was selling against IBM 370. At the same time Ted Codd, in IBM laboratories published a paper on the relational model for databases. While Amdahl focused on creating a faster engine, IBM concentrated on parallel processing.

Maurice says: “Amdahl believed that what you needed to do was have a very fast engine. Other engineers were saying, ‘Now, even if we look at Moore’s law and all that sort of stuff, the engine speed will only go up like this.  Whereas we want the market to grow like this. Therefore, you’ve got to have multiple engines.’ Amdahl’s focus was; ‘I’ve got a task, so, I’ll execute the task.’  Whereas IBM thought about ‘We’ve got lots of tasks to do.’ They were always going to win out, Amdahl was always going to win out on a task versus a task, in terms of scientific type processing, but the bottom line was that the world was going to be multiple tasks.”

Maurice was offered a job by Amdahl, but turned it down, he says: “It was in the nineties and I knew then that they were doomed to have lost in the actual architecture of systems because, Amdahl’s mind was in a different architecture place to IBM.”

In the early part of the 1980s Maurice moved to Poughkeepsie in New York in the US to begin working in the System 370 architecture group, which he calls “the holy of the holies”.  Poughkeepsie was the manufacturing place for the biggest mainframes.

Maurice says: “I was in this group of people who were designing the next mainframe and the mainframe after that.” He says that he’s not 100% sure why he was moved to the US, but his experience working with IBM’s customer Rolls Royce had contributed he adds: “I had all this vision about how complexity was coming, and what was really needed over the next one or two generations.

IBM’s fortune saw a downturn in the 1980s as growing competition and the new desktop PCs started to eat into its markets. With various failing projects during that time Maurice says: “If I have to answer the question ‘why is IBM not the number one technology company today?’ It’s not the fact that they gave the operating system away to Bill Gates.  It’s the fact that IBM has never understood application programming. IBM completely and utterly misunderstood.  I think the, the industry is still misunderstanding.”

In the early 1990s, Maurice and his wife returned to the UK where he was based in Chiswick, he says: “I was looking after big, big systems, and trying to get a development that I was still working with closer to some of the customers in the UK, especially the banks. I was not happy doing this because IBM was flailing around and failing.”

In 1993, with IBM continuing to suffer loses, Louis Gerstner took over as Chairman of the board. Maurice says: “It was actually, really, really, exciting.  We knew something big was happening.  The products weren’t selling, or they were having to discount them by a huge amount.  The actual support costs, as they were then, which were quite huge, were being trimmed down.” Gerstner stopped the multiple developments and focused on making IBM a services consultancy.

Maurice adds: “We actually didn’t know what we were doing because IBM was then saying, ‘We’re going into services and consultancy.’ It was an incredibly interesting time … I started going backwards and forwards to the US looking at various things.”

Feeling that he had little guidance from higher in the organisation, knowing that IBM had systems to design mainframes but not systems to design systems that his customers wanted, Maurice proposed a design method. He explains: “I put forward a proposition that we designed a design method, called the end-to-end design method, for IBM services to use for customers.  I led a project in Raleigh in North Carolina for about a year or more, shuttling backwards and forwards, designing a method by which we could design systems and teach people how to design systems. We started making quite a lot of money, in terms of supporting ourselves and getting profitability to our whole environment, and the US eventually followed suit.” He continues; “We attacked the infrastructure. SAA was supposed to have filled the application space, and all sorts of other things and it never did. In the end, IBM went out and bought some products.”

IBM’s culture of rules gave Maurice the incentive to try things, he explains: “If you make a mistake in IBM, unless it’s a really crass mistake, IBM is very forgiving. I learned it’s much better to do something than not to attempt it because you are afraid of the rules.”

Having become a Distinguished Engineer, Maurice was then made an IBM Fellow which he says was to some extent down to the work he did in outsourcing where he would sort out problems. He says: “I started to try and help the outsourcing people, sometimes on very large bids, or on very large projects that had gone wrong, et cetera et cetera. I’d do all sorts of things. I was trying to sort some other things out in the States and I was travelling around Europe all the time, trying to bail out various projects that were in deep trouble.  So, I was the go-to person if you like.

“We also developed, what was probably the most complex system I’ve ever seen, which was a system called the CLS global foreign exchange system; Continuous Link Settlement. All the world’s foreign exchange goes through this.  I sat with that thing with all its problems.”

On the subject of management, Maurice says: “I’ve managed huge projects, but never people. Before I joined IBM, I started managing people, and I didn’t enjoy it, and I think the bottom line is that you gravitate to what you like doing. I gravitated to various things: being a systems engineer, doing a bit of programming, into big designing, into mainframes and then into consultancy and services.”

On mistakes he has made: “I might say, possibly not stopping in the US and maybe not going up the management tree in IBM, but I don’t think I would have liked that.”

On the public sector

On the subject of public sector system disasters, Maurice points to the size of the needed systems and the procurement process as some of the main issues; he says: “As you get bigger and bigger systems, then the chances of them failing get higher and higher.  …Procurement is flawed from the start. Also, with Government systems failures, you can’t cover them up so easily, whereas, in the commercial world, you can cover them up.”

On the future and AI


Maurice says: “If you look at what the IT industry does, it has these what I’ll call fashions, and AI is a fashion at the moment. …People seem to think that these systems are somehow, magically, going to have an insight into something. I keep saying to people, it’s still only programming.  In other words, programming is a set of rules that you put in there. Those rules go in and do analysis based upon what you’ve said, and then, somehow, inside there, artificial intelligence says I’m going to create some more rules in there and these rules are going to be new rules that you didn’t think of, but they’re indirect rules, because of the rules you put in there in the first place. …  There’s the magnificent example of IBM playing Kasparov. …  What did IBM do?  It put the rules of chess in and all the thing had was enough power to generate more moves than Kasparov could think ahead.”