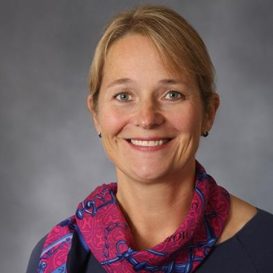 Naomi Climer CBE FREng, FIET is a British engineer who has worked in broadcast, media and communications technology chiefly at the BBC and Sony Professional Solutions, and was the first female President of the Institution of Engineering and Technology (IET).

Naomi’s early life was conventional: her father is an engineer and her mum stayed at home but was nevertheless very inspiring and quite feminist.  Her family was quite outdoorsy and she was a great tomboy, finding a niche between her geeky brother and her very sociable sister.  While there was a general expectation that boys would fix things, she recollects dismantling and repairing the lawnmower as a matter of course when in her teens.  She was always interested in how things worked, including the BBC Micro they had at home.

Naomi passed her eleven plus and went to Gainsborough High School in Lincolnshire, which coincided with a family move.  Despite her initial reservations she felt that attending an all-girls school was a real privilege because science subjects were available as a matter of course and the pressures and influences that discourage girls from pursuing STEM subjects in a mixed environment were absent.  So despite being an all-rounder she opted for sciences and took maths, physics and chemistry A levels.  She went on to read chemistry and management science at Imperial College London.  She chose the chemistry because it was the most challenging and the management science perhaps because it looked like a soft option at the time.  In the event the techniques and methodologies she learned there proved invaluable.  She observes that while her career looks structured in retrospect, in reality it was much more random.

Following a number of unsuccessful applications, Naomi’s early career started somewhat inauspiciously (and even then, only after she downgraded the qualifications on her CV)  in a department store selling lingerie.  She swiftly moved on to become a delivery driver but the experience of dealing with customers was invaluable in terms of developing people skills (as well as testing her energy and enthusiasm). She recommends that everyone should spend some time in retail.

BBC to Guernsey and Back Again

Naomi responded to an advertisement for trainee engineers at the BBC and worked there for about four years.  It was an exceptional opportunity, the kind of high quality graduate programme that makes a huge difference to an individual’s career prospects.  She instantly knew that it was the right place for her (and it ultimately led to a prestigious industry award).  She qualified as a BBC engineer but then moved to Guernsey to get married.  Her arrival in Guernsey coincided with the formation of an independent local radio station and she became the chief engineer, responsible for everything from licence applications to construction.  Working on a shoestring for a small organisation without the resources of the BBC was another important life lesson.

On her return to the UK Naomi got a job in the BBC World Service running the engineering, IT and operations training,  This was her first experience of managing a team and she made every mistake in the book on her way to becoming a competent manager.  Part of her role was training journalists to set up satellite phones and she learned quickly that the practice out in the field was very different to the theory in her textbooks.  Making sure the equipment was robust and easy to use in challenging or remote environments was critical, and she sees this as another important learning process.

Naomi went on to work at BBC News where she was involved in the move to digital which included things like nonlinear editing: it was a very interesting transition both technically – and culturally.  Journalists had to start editing in the field which at first they found challenging – especially when their pieces were subsequently (and irritatingly) re-edited.   However they soon learned to use the technology to their benefit: it gave them the capability to deliver uneditable content and retain editorial control.  Naomi sees this as an example of just how empowering technology can be.

After BBC, Naomi worked at ITV Digital (2000-02), where euphoria and despair characterised the build up and close down respectively.  She then moved to Sony (2002 – 2012), where she was nominated for, and won, the inaugural International Association of Broadcast Manufacturers Industry Woman of the Year Award in 2014.   Despite feeling rather an impostor at the time, as there were many men who were equally eligible in terms of their contribution, she commends the IABM for setting this up and continuing to support it.

During her time at Sony, Naomi was sent to California to run a start up there, which was a real high point. She found the cultural differences fascinating, not just between the UK and the US but within the US.  California was also a fundamental contrast to Guernsey which was, by comparison, delightfully parochial.

Institute of Engineering and Technology (IET) and Future Work

Naomi joined the IET Board of Trustees as a mid-term replacement and then stayed on, eventually being elected to be Deputy President which led her to become the first female President of the IET.  Despite it being a male dominated institution, she felt very welcome and well supported.  She thoroughly enjoyed the work which involved visits to engineering facilities and outreach to schools.

Naomi is now co-Chair of the Institute for the Future of Work, which  advocates a considered approach to technology development from both policy and scientific perspectives, to help ensure we are prepared for technological change (for instance in terms of employment law and education) and can use it as a force for positive change and reduce the risk of societal harm.  The Institute’s formation was the result of a report from a multidisciplinary commission.  She particularly enjoys working with people who have different perspectives.  The work also complements what she does in the Royal Academy of Engineering and the IET, especially on the need for STEM in education.

Naomi is active on social media, mainly through Twitter (@naomiclimer), though she struggles with maintaining a consistent tone because the things she wants to tweet are very different – diversity and STEM skills on the one hand and things that make her laugh on the other.  She wonders whether she would be better with two Twitter identities.

Life 'After' Work, Goals and Priorities

Naomi is officially semi-retired but is still fully engaged with the Institute for the Future of Work: she wants to get it to a stage where it makes a real difference on something that matters, irrespective of scale.   Her other priorities are domestic: keeping fit, enjoying the outdoors and maintaining good health.  Her less well-known attributes include a strong sense of fun and an enthusiasm for motorbikes, but her family, and enjoying family life, remain her fundamental priorities.

Naomi finds the lack of gender diversity frustrating – she was one of three women in a team of 100 at the BBC and the balance has not changed much since: around 10% of women in engineering and 17% in IT generally.  Personally, she thinks that there are multiple contributing factors that start at birth, and that it will take a big societal shift to change things.  She considers that the essential thing is confidence in oneself.  Having encouragement from an inspiring mother was a huge help, as were her many mentors.  Her personal values of honesty, integrity and (particularly) energy have stood her in good stead.  She is also conscious of the potential threat that men may feel if there is a strong diversity agenda and tries to remain fair.

Naomi is proud to be rated in the top 50 women in engineering and one of the most influential women in IT and she sees her position as an extension of her work on diversity.  She believes role models are important and uses her influence to improve diversify and inclusiveness.   She is very conscious of the societal impact of technology and urges technologists to think harder about those consequences.  On the other hand, she detects a tendency to overreact to developments like AI and indulge in dystopian visions.  She feels she can contribute to a more sensible discussion on these ethical issues.

Naomi is very positive about mentoring:  she has benefited from many mentors who have given her encouragement at the right moments so that she has gone on to try things and take on challenges.  She has also learned from “reverse mentors” who have (without realising it) shown her how not to do something.  She advocates mentoring, both formal and informal and would strongly encourage people to ask for guidance even from senior colleagues:  most people are flattered and if a question is quite specific it need not be time consuming.

Empowering impact of technology:  Naomi considers that the ability to be more mobile and flexible is hugely empowering, especially for women juggling childcare and people with physical disadvantages – but it can also be debilitating because it can allow work to encroach on everything else.   She wonders whether the next generation, seeing parents distracted by devices, will develop a healthier relationship with technology.

Next generation and the future of work:  Naomi is struck by the difference in outlook – things that worry her generation don’t necessarily worry the next generation – such as job security – because they have grown up with job mobility as the norm. It is important –and difficult – to see things the way young people do.  She also believes that it is vital to engage with those impacted who may be adversely impacted by technology.

Interviewed by: Kerry Mansfield on the 17th October 2018 at the WCIT Hall