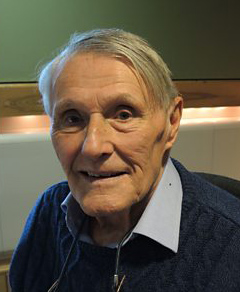 Peter Hermon joined LEO Computers after he obtained first class honours from St. John’s Oxford, and seeing an advertisement for a mathematician from J. Lyons & Co. He was one of the most brilliant LEO recruits and quickly made his mark as a programmer and consultant. He moved to BOAC where he was responsible for the development of BOADICEA, the airline reservation system which became a major UK success story and later became a Director of British Airways.

Peter Hermon was born in Oxford in 1928, his father worked for the Oxford based Morris Motors as a technical assistant. He later went on to be Morris’ technical manager in the Midlands. Peter’s mother was a dressmaker. The family lived with his mother’s parents. Peter describes his upbringing as working class and happy. He says he enjoyed “sitting in my grandad’s chair, opposite a big window and pretending I was a bus driver.”

Peter went to Lenton primary school in Nottingham after the family moved there for his father’s job. In 1939, he progressed to Nottingham High School which his father initially paid for and then Peter won a scholarship to cover the rest of his time there. He says: “I liked studying. At different times I liked history, Latin and Greek, chemistry, before I came to mathematics.” Peter was good at all of these subjects but eventually settled on maths as his subject of choice.  He also spent some time in the drama society.

After completing school and achieving numerous O levels and A levels in scripture, physics and maths, Peter was signed up for National Service in the artillery of which he says: “I didn’t really cooperate with that; it was a complete waste of time.  I did very little and learnt very little. I spent lots of time in Libya where I was stationed just killing time really.”

After serving two years in the National Service, Peter won several scholarships and went to St John’s College, University of Oxford, where he gained a first-class honours degree in pure and applied maths.

After university, Peter started to do research but quickly realised it was not for him.  Instead, having got married, he decided to get a job and was offered a position as Head of the maths department at Leeds Grammar School. He says: “Crazy isn’t it.  No teaching experience whatsoever. They couldn’t get maths people to teach in those days because the salaries weren’t very good, so they made it attractive to do that.”

Unfortunately, Peter did not enjoy teaching because the boys were not motivated to learn. He decided to leave teaching and saw an advertisement in the Daily Telegraph for mathematicians to join J Lyons; he says: “I wasn’t interested in it.  I was filling in a year doing teaching, which I didn’t like, and I wanted to get out of it, and I saw this advertisement in the Daily Telegraph for mathematicians for J Lyons. I wondered why J Lyons wanted a mathematician, so I applied and was interviewed.  It sounded interesting, so I accepted it. It was a way of getting out of teaching.”

Having joined J Lyons, Peter did a six-week training course in programming, he describes the language as ‘near machine language’. Upon completing his training Peter was given the task of writing a business process to run Ford’s payroll. He adds: “I was given details of statistics Ford wanted and I had to produce programs to produce the statistics.” It took him four to five weeks and says it worked fairly quickly.

Peter says of Lyons success in IT was down to their efficiency; he explains: “Lyons had had a good reputation for years about being efficient in their systems. When you’re making money on cakes costing 3p or something, you can’t afford to be inefficient with the paperwork. They had a good organisation and methods department that worked out their systems in great detail, stripped them down to the essentials and that was a good starting off point for computerisation.” He adds it was an advanced company which is what led them into the computer business. They were one of the first businesses to disrupt their own business, introducing a computer business alongside their cake and café business. They hired good quality people and promoted a sense of camaraderie. Peter says they achieved this by “severe selection techniques, and if you weren’t very good, you were out, without any salary.”

He points to David Caminer, the manager of the Lyons programming team, as an influencer on his career. He explains: “His work ethic for speed and efficiency was something that kept your nose to the grindstone.”

Peter stayed at Lyons for five years and in 1959 he decided it was time for a move. He explains: “I couldn’t see the LEO life going on.  They obviously couldn’t make it with the intense competition from people like IBM. They had been in the punch card business, and they were very strong in America and just swamped things.   LEO were building four or five LEOs a year, IBM were building hundreds. Ultimately for Lyons, it was a question of money. You had to find hundreds of millions to support computer manufacture, and they hadn’t got that.”  Ultimately, Lyons sold LEO to English Electric.

In 1959, Peter moved to Dunlop, a choice he made based on its connection with LEO, although they also started to implement IBM installations. Dunlop were using computers in its back-office operations to save money. Peter says that they were one of the few farsighted companies to start to adopt the technology at that time. While working there Peter took on a more international role and visited plants all over the world.

1965 Peter was headhunted to join BOAC to develop a reservation system to replace their inefficient manual system of selling seats on flights. The system became known as BOADICEA and is Peter’s proudest achievement.

He explains: “BOAC were behind the airline industry generally in so far as they had no proper reservation system, and they had to get one very quickly because, reservation is very volatile.  What happens is, people book in advance, but very close to flight departure you get lots of cancellations and with the paper system, if a seat’s cancelled, you can’t get the paperwork through quickly enough to re-offer it for sale, so you lose a lot of business.”

Sir Giles Guthrie, BOAC’s Chairman made the decision to invest in computerisation. Peter adds: “When I got to BOAC I was on my own, and I had almost complete power and autonomy to develop this business-critical system for them.”

Having sought tenders from a number of companies, Peter selected IBM because they had a rudimentary reservation system; the Passenger Airline Reservation System (PARS), which had been developed for a domestic US airline and which could be developed further for international travel. Peter headed up the project which had around 300 programmers on it at one time and an initial capital investment of around £8 million.

Peter says: “There were programmers, then you had to get new buildings to put the computers in.  You had to organise for terminals to be installed in BA offices all over the world. There was training of all the staff.  I was in charge of all of that.”

The project was delivered on time and on budget. He says of its success; “I spent a lot of time getting my people to go around and talk to reservation staff and sales staff, all over the airline, to see what they wanted.” He compares it to the modern-day NHS failed project, adding: “When you think about this big system they were planning for the Health Service a few years ago that collapsed, you find out that the doctors haven’t been consulted.”

As Peter’s career progressed, he moved away from the technical towards general management, something that he says was because his employers “could see I was a good manager and wanted to utilise my capabilities.”  He adds that his ability as a manager came from his education which taught him to think logically and consistently; a philosophy he has lived by.

In the early seventies Peter was instrumental in the merger and subsequent integration of BOAC and British European Airways (BEA) which became British Airways. He says the challenges included tackling resistance to the merger; “In a merger like that, jobs are going to get lost.  You’re not going to have two computer systems; you’re going to have one.” It was a job that he says he just got on with and was quite hard-headed about in order to make it successful.

In 1983 Peter left British Airways where he had been running the European branch of the airline. He went on to become a successful consultant providing services to a range of companies on mostly IT issues but also general management matters. After five years he retired and wrote two books on hillwalking which has been a life-long passion. He has also travelled extensively.

Peter says that he has “enjoyed my life immensely.” He believes that his developments and learnings at LEO have helped him enormously to mentor many young people through their career development and on into top positions in computing and companies.

Peter says that he doesn’t think that we have AI at the moment, but rather machine learning. He says: “I’m not switched on by AI.” He points to the fact that TV cannot yet get subtitles correct and adds: “I don’t think beating people at chess means AI works either. That’s just a question of following rules in great detail. AI certainly doesn’t frighten me, nor does it really excite me either.  I don’t see any dangers.”

On women in IT

Asked why there were so few women at the University of Oxford when he attended, Peter says: “Well because for a long time the universities didn’t want women. It was discrimination, the same as why women didn’t have the vote.” He says that in his time at J Lyons there were plenty of women working in LEO, adding; “women, who were just as good as the men.”

During his time implementing systems at Dunlop, the Post Office and Ford, Peter says that jobs were created for women as computer operators, programmers, “the whole gamut”.

Interviewed by: Tom Abram on the 16th October 2019 in Virginia Water, Surrey