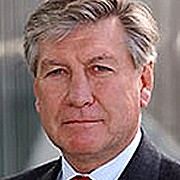 “I think one of my greatest achievements was in restructuring of Hitachi Data Systems in the UK. When I went there it was turning over around £20m and we ended up turning over £80m – four years later.”

“I’ve had  a large number of non-executive positions in the later part of my career; one of them was with an organisation called Biotrace, which was a London stock-exchange company and we were able to sell that business at a 70% improvement to the share price for $150m after 2 years of being on the board there and making some useful contributions.”

Peter was born in Ewell, Surrey in 1946.  His father worked for British Rail, running a directory service (timetable information) from Waterloo station.  His mother was a housewife.  He has an elder and a younger sister.  His father sadly died when he was nine, but he was close to his mother and sisters and enjoyed a stable and supportive home life.

Peter attended Tiffin School in Kingston, an outstanding grammar school with excellent teachers, which had a major influence on him:  competently run by a retired Brigadier he learned to be prompt, polite and smartly dressed.  He was good at sport and captained the school at cricket and rugby and played chess for Surrey.  He has retained good links with the school and returned for old boys’ matches, maintaining contact with many friends which was made easier by its London location.

Academic work took rather a back seat at school, but he achieved nine O levels and two A levels – in History and Geography.  He then went up to Cambridge to read history at St Catherine’s College. Like many people in the 1960’s he was the first person in his family to attend university.  He thoroughly enjoyed his time there playing several sports and making a wide range of friends and contacts, many of whom he still retains as friends. In order to have time for social engagements and sport Peter learned to be very organised which has also proved useful in later life. Each year he worked moderately for the first two terms and then compensated from Easter onward.  He found the subject interesting and relatively easy.

Computing had not featured to date, but after university, and seeking a long-term job in an industry with a future Peter chose to work for IBM starting as a systems engineer.  At this time of punch cards and the 360 range, IBM accepted graduates from any discipline and put them through an excellent 18 month training course, which comprised six week stretches in programming, technology, system design and implementation, followed by a spell supporting a sales team in a branch office.   He started in Croydon, helping customers install machines and programmes.  The IBM staff were often barely ahead of the customer in terms of technical knowledge.  Computers were very expensive machines and the software and support were included in the package.  A typical assignment saw him on customer premises helping them transfer existing systems onto their new IBM computer.

While some colleagues remained in technical support roles Peter chose to move to sales, where jobs tended to be allocated to older, more experienced individuals.  Salesmen were highly regarded: they had to understand the product, the competition and build a strong relationship with the customer and would be talking to senior individuals within those customer companies. People were promoted on merit and many relatively young individuals were given a great deal of responsibility.  Management was strong, with regular reviews and formal appraisals, and those performing well moved on quickly.

After two years in Croydon, Peter moved to Birmingham, initially as a salesman but soon as account manager with British Leyland as his key client. A large customer, Peter had several salesmen and around a dozen systems engineers giving technical support across the UK. Sir Eddie Nixon, then CEO, had links with the Manchester Business school and while in Birmingham Peter was selected to spend three months there studying for a mini MBA.   Following that he was moved to Leeds to become IBM’s youngest branch manager at the age of 29.

After three and a half years, Peter was seconded to IBM’s European Headquarters and moved to Paris with his wife and young son.  His job was to liaise between the headquarters and country operations and he quickly learned how, despite the common IBM brand, values and behaviours  business culture differed between European nation states.  It was a useful lesson.

On reflection, Peter sees IBM’s universal structure as both strength and weakness – by the late 80’s too many people had only ever worked for IBM, the thinking was too similar and entrenched, and they lost touch with customers who wanted more flexibility.  In the end, under severe pressure from competition, they had to recruit externally for their leadership team.   In the early days, competitors like UNIVAC, NCR, ICL and Digital had their strengths but could not challenge IBM’s dominance.  However when large Japanese conglomerates, Fujitsu and Hitachi, started producing compatible technology that was also very good but half the price of IBM, they presented a significant threat to IBM’s market share.  The only thing holding them back was lack of suitable partners on the ground in terms of sales and technical support.

Peter does not consider himself technical and always preferred the customer interaction and sales side.  He was therefore involved in the review of the Japanese competition around 1984, part of which involved equipping salesmen with material they could use to challenge their competitors’ claims.  However, further challenges to IBM’s dominance followed from multiple small competitors providing much cheaper IBM-compatible products.

In 1987, after 18 years in IBM Peter was approached by a Hitachi distributor (NAS – soon acquired by Hitachi) who offered to double his salary and give him a wide range of European responsibilities so he decided to leave IBM.  Hitachi was a well-run business, but the culture was very different and they needed a much more sophisticated, structured, and professional sales approach.  When he joined, Hitachi was losing business to IBM despite charging half the IBM price.   Peter spent eighteen months running several European country operations but was then appointed UK managing director.  He brought in people, changed the culture and grew the business four-fold in five years, eventually competing successfully against IBM with only a marginal price differential. As a result of this success he was appointed Executive Vice – President for all Hitachi’s European country operations. One legacy he left in the UK was the strong management team that he had built and they continued the successful growth of the UK. He is pleased and proud to say that during his years there he helped to transform the operation to a customer-centric, fast growth business as well as building a very strong leadership team.

Although Peter enjoyed his new European role he felt increasingly that decisions were primarily made from Japan and also they took longer to make than he would have liked in a fast moving competitive industry. Although the salary and package was very good there was no possibility of any share or share options so in 1995 he decided to make a change and move on.

Peter took up a role of President Europe for a US based company Cambex that manufactured IBM compatible memory with considerable success and wanted to expand outside of the US into Europe. They were coming out with a new range of disk storage, however the disks were never as reliable as they needed to be so when the price of memory collapsed the US decided  to pull out of Europe. So two years after setting up European operations in UK, Italy, France, Belgium and Germany he then had to shut them down.  His biggest challenge was persuading the US HQ to let him close things in an orderly fashion which he did.  In retrospect, this proved a turning point, but his pivotal moment came a couple of years later when he joined Spring Group which consolidated small services business with US investment capital. His role as Corporate & Business Development Director was to work on acquisition and integration of these companies into the group and helping the several different companies to cross-sell a variety of services to the larger customers. This was the time of the .Com boom and Spring decided to build an on-line recruitment company, Spring.com. Just after its launch the Company’s share price rose 6 fold but when the 2000 .Com crash came, like many other companies it never really succeeded. Although Spring was a UK publicly traded company the most influential shareholders were from the US and they effectively changed the strategy of the Group by deciding to sell off several education and IT services companies to focus solely on the IT recruitment market. This was not what Peter wanted to do so he accepted a generous redundancy package and terminated his work with Spring.

After leaving Spring in 2000 he found he was being turned down for a number of senior management appointments. The reasons given were many and varied but in reality because he was over 50 in an age where technocrats in their 30s and 40s were seen as in tune with the fast moving changes in technology and the tech. sector.  So he had to consider his options and decided to move to a portfolio career and became a non- executive chairman or director on a number of boards, most of them IT focused, amounting to 16 different positions in the years to 2018.

Recently he has cut down activity to just a few roles. One is with a venture capital trust BSC VCT2 which works with an management company to invest in small private growth companies.   They have around 40 companies on their books representing about £60M of capital. He has been on the board for a number of years and is just taking over the Chairmanship.  Peter also co-founded Turnberry Management, a consulting company which helps small companies to find the right route to market and to hire the right sales & marketing skills.   He has just retired from two three-year terms as NED of BCS’s commercial subsidiary, BCS Learning and Development and is Chairman of KeyPoint Technologies, which provides software for mobile devices. Now that he has more time, his interest in history has rekindled. He is involved in local charity work, finds time for the odd round of golf and is fairly preoccupied with his four grandchildren.

On reflection he attributes his success to having a good brain, working hard and having real passion for sales.  He also thinks that being articulate, treating colleagues well and generally being able to get on with people (plus a degree of luck) have played their parts.

Peter’s greatest achievement was the way he transformed Hitachi’s UK operation, delivering a profound cultural change, creating an excellent leadership team and achieving significant growth and commercial success. Looking back there is little he would change. He feels he was right to leave IBM and Hitachi, although he probably left the latter for the wrong company.  That said, he feels that this gave him a more varied experience than if he had stayed with a few mainstream companies.

Looking ahead, he believes that digital technology will continue to disrupt traditional business patterns, will continue to be important for competitiveness, and will become ubiquitous.  There are challenges around the constructive use of artificial intelligence and “ big data “ but he believes that used correctly they can be transformational.  He predicts that the IT sector will continue to offer huge career opportunities for young people but the real challenge is to make the industry more appealing to them.

Interviewed by: Ian Symonds on the 3rd May 2019 at the London Offices of BCS