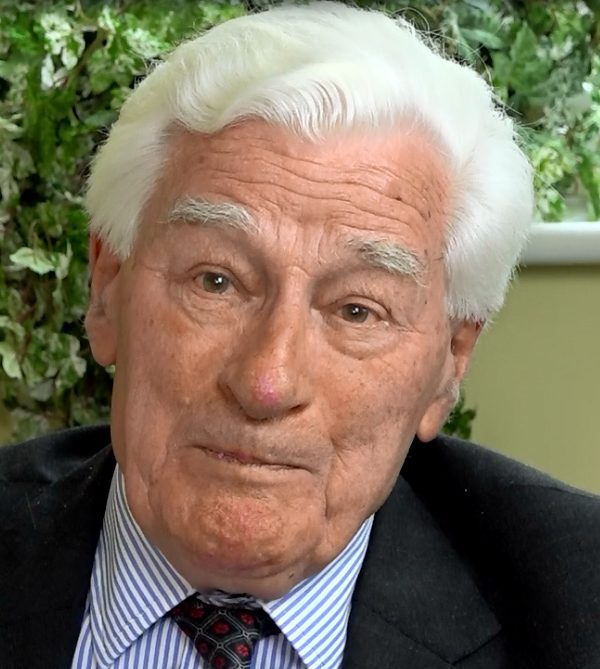 “I was a pioneer of the design and construction of computer audit techniques and over just a relatively few years we sold over 30,00 copies of a book I wrote on the subject of 400 pages and I lectured to over 20,000 people which shows how important computers were becoming.”

Brian Garton Jenkins was born in 1935, in Beckenham, Kent. The elder of two sons, his father had a florist business and his mother was a housewife.  During the Second World War, the family were evacuated to Scarborough with his father serving as a Major in the Royal Artillery.

Sir Brian went to school at Tonbridge, completing his National Service as a Second Lieutenant in the Royal Artillery, before going up to Trinity College Oxford to read Modern History.

He says the army gave him a ‘favourable impression of discipline, and opportunity”.  In the space of eight weeks young men were transformed from boys, “quite a lot crying through the night”, to a group “all so fit and positive and working together”.  The army taught him how to live and cope with different ranks and responsibility.

He feels that he did not get as much as he should have out of his time at Oxford, as he did not take part in the clubs and societies that appealed to him prior to his experience in the military.

Sir Brian arrived at his career in IT through being a chartered accountant.  In 1966, it became clear to the accountancy profession that computers were going to be crucial in the recording and presentation of data.  At the time he was a senior manager in Cooper Brothers, he had no prior experience of using computers until the Senior Partner, Lord Benson asked him to take on this new role.  He went on a training course, but was mostly self-taught.  He understood the principles of Boolean logic and the basic on and off switching.  Within a few weeks he was programming.

In the 1960s few companies relied on computers, so it was a gradual transition.  Coopers increased their use of computers in tandem with their clients. His first clients included the Post Office, focusing on telecommunications.  Their main use of computers was not in accounting but in development of systems such as coping with international calls.  They needed to solve the problem of sharing and accounting for income on traffic passing through several countries.  Smaller clients included Babcocks and Joe Lyons.  It grew quickly.

By the early Seventies most companies were using computers for auditing.  They were writing their own programmes, as there were no packages.  Royal Mail used computers for telephone billing.  In the early days nobody trusted the results, so the computers’ calculations were checked manually.  Sir Brian says there was too much “simply mechanising what was already being done”.  The technology was not trusted. It was vital that the auditor was able to to satisfy himself that the data was substantially correct.

At Coopers they recruited the IT team from their existing audit staff, as it was an auditing skill that was needed. There was a smaller group of computer trained auditors who had been on a six-week computer course provided by the company.  The computer audit groups worked in ten locations around the country, and ended up training teams around Europe and the Commonwealth.

By the mid-1970s computers were commonplace.  The Institute of Chartered Accountants felt there was a need for an authoritative manual to demonstrate to smaller firms how computers were being used for auditing.  Sir Brian wrote the second edition of  “An Audit Approach to Computers”, in 1978, which was followed by another three editions, the final one in 1992.  The book became the standard text on the subject, and was used internationally, translated into several languages.  Sir Brian says that it is in the interests of the profession and public that ideas are shared between firms.

By the late 1970s, Sir Brian was moving away from computers, as he was promoted to partner.  He continued to take part in speaking engagements until 1992.

In 1995 Sir Brian became Chairman of  the Woolwich Building Society.  The Chief Executive of the Woolwich, John Stewart, had a good understanding of IT, so Sir Brian worked closely with him to redesign the use of computers at the Woolwich.  This resulted in the company getting a competitive lead in the market which lasted until they were taken over by Barclays.  They devised a system called Open Plan which allowed them to immediately present on screen, a complete picture of the relationship with that client.  Sir Brian describes this success as being as a result of “treating IT as a strategic Board matter, having our top IT Director on the Board & ensuring all our executive directors had sufficient understanding and commitment to maximising efficient and forward looking IT”.  He stayed as Chairman until 2000.

From 1996, Sir Brian was closely involved with the British Computer Society, becoming President form 1997 – 1998.  The theme of his presidency was “IT On Board”.  He believed IT needed to be part of the setting of the strategy for whole organisations.  He was keen to encourage more students to focus on IT as well as the more traditional, Accountancy, Law, etc.   They were seeking to get IT recognised as a profession in its own right, with a “discreet and recognisable body of knowledge”.

Sir Brian had a significant role in founding the Worshipful Company of Information Technology – the IT livery company.  He describes a livery company as “a very strong ingredient in the total position of the City of London”.  The liveries attract people and businesses to make a contribution for the public good as well as representing their particular industry.  An important part of the work of modern livery companies is to support their industry and trade.  During Sir Brian’s year as master, the WCIT developed two initiatives to reinforce the position of IT in the City.  The first was a 50+ page report demonstrating the role and value of IT as an integral component in the success of the City as the world’s leading financial centre.  The second initiative was to develop a means to bring the worlds of Science, Technology and finance closer together, entitled “The Missing Link”.

In 1991 Sir Brian was elected as Lord Mayor of the City of London.  His theme was “The City serving Europe”.  He visited many capitals, opening up discussions to promote the City.  It was the finalisation of the Common Market in services, so Sir Brian was a key ambassador. He thoroughly enjoyed the role as it involved meeting people.

Sir Brian considers himself to have been lucky.  It is unusual to be both head of your profession (in his case, President of the Institute of Chartered Accountants in 1985-6) and Lord Mayor.

Sir Brian has received many honours and awards:

Sir Brian was a non-executive director of various companies but probably his main contribution was in charity work. He was chairman, then president, of the Charities Aid Foundation (CAF). During his chairmanship the Charity Bank was formed. Later, he became Prior of the Order of St John and Chairman of St John Ambulance. He was also a long term trustee of Community Service Volunteers (CSV).

Interviewed by: Richard Sharpe on the 4th July 2016 at the WCIT Hall