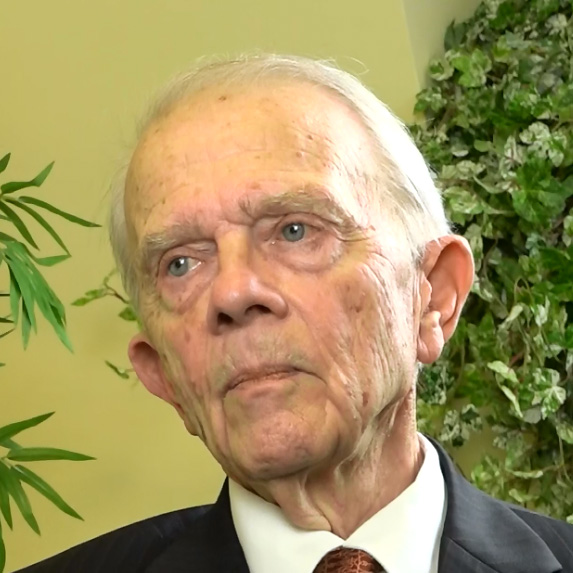 “I think my advice would be, always work hard to understand what you are doing, don’t take things at their face value, don’t accept things you’re told because you’re told them by authority, think them out for yourself and be satisfied that what you’re told is right.”

Sir Bryan Carsberg went to Berkhamstead School.  From an early age, he was fascinated by mathematics, scoring over 90 percent in his O’Level in both the elementary and additional papers in the subject and coming top in his year.  He was not allowed to take the subject for A’Level because he had not studied physics.  He took French and German, but did not enjoy them so at the age of 15, Sir Bryan left school to train as a chartered accountant.  His father had been the finance director in the family business manufacturing surgical instruments. Sir Bryan always knew he wanted to be an accountant.

At the age of 21, Sir Bryan qualified as a chartered accountant and started work as an article clerk at Hesketh, Hardy, Hirshfield & Co.  The small firm had four partners and between 20 and 30 staff working in Holborn, London.  By the time he was halfway through his training contract he had his own audit jobs.  There was a lot of numerical work involved, prior to the advent of computers, and often he would have to finish the calculations as well as do the audit.  After articles, he was offered a partnership at the firm, but felt he should have a broader experience, so he left to join Deloitte, Plender Griffiths, a bigger firm who were later merged with Price Waterhouse. After two years he left the security of working for an established company, to take over a local accountancy practice that his father had built up in Amersham, doing the accounts for shopkeepers, farmers and publican.

In 1964 Sir Bryan became a lecturer at the London School of Economics in accountancy. This came about because he had come top in the professional accountancy exams and colleagues had asked him to help with their studies.  This had led on to him running in-house training at Deloitte’s and then to being offered a lectureship whilst doing a masters in economics with accountancy as his special subject.  He was one of only two members of the teaching staff at LSE who did not have a degree.

It was while he was at LSE that he came across computers for the first time. They were not a major part of the course, but the students were taught to write little programs that were run on computers. Sir Bryan learned to use computers himself, by sitting in on the classes the students were having.

After four years at LSE, Sir Bryan was offered tenure – a lifetime contract – and sent off to America to broaden his experience at the University of Chicago.  It was an exciting place to be in the world of accounting because they had started to do empirical research using econometric data and gathering real evidence about the world and analysing it properly in order to reach their conclusions.  Sir Bryan was rubbing shoulders with future Nobel Prize winners in the accounting and finance departments of the university.  For their empirical research, they needed a lot of computer power, so they would put their data into the computer in the evening and collect the results the next morning.

His next post was as the first Professor of Accountancy at the University of Manchester. He built up the accounting department as student numbers were increasing rapidly at the time.  He became Dean of the Faculty and was involved in the governance of the university.  He also used his time at the university to fill the gaps in his knowledge from never having studied science at school, reading everything he could on physics and astronomy.  He was at Manchester for 8 and a half years, including returning to the United States for a year as a visiting professor at Berkeley, University of California.

Between 1981 and 1984, alongside his professorship, he served on panels advising the Secretary of State, bringing his accountancy and financial skills to the world of telecoms at the point when British Telecom was taken out of the post office.  He was also involved with the creating of competition during the launch of the original mobile phone networks, on the panel choosing Vodafone as a competitor to BT’s Cellnet. Vodafone was chosen out of the five contenders, because they believed that mobile phones would become big, whereas they others expected it to be a high-priced niche market.

Sir Bryan’s work advising the Secretary of State brought him to the attention of ministers, so when it came to set up Oftel, the communications watchdog, he was first on the list, becoming Director-General. The governments were looking for an accountant economist with international experience who understood the economics of industry and competition.  He was fascinated by the opportunity to influence the development of a new industry.

The two main elements for the framework of Oftel’s regulations, were firstly, competition is the regulator’s best weapon.  The markets are much cleverer than any individual, and if the opportunity is there, people will come in and do things that the regulator has not thought of.  In instances where competition cannot be achieved within a reasonable timeframe, you must mimic the effects of competition.

At the time British Telecom was in the process of being privatised.  It had a pricing structure that was badly out of line with the cost structure.  Local telecommunication was underpriced and long-distance, including international, was overpriced.  This meant that residential companies were paying too little, and businesses were paying too much. This was a problem for creating competition as it was difficult for entrants to the market to charge reasonable prices and make a living.

Cable and Wireless were given a licence, operating in the UK under the name of Mercury Communications. They were had the obligation of building a network of a minimum size specified by the government, interconnected with BT’s network.  It was Sir Bryan’s job to enforce the terms of the licence and the terms of interconnecting Mercury’s network with BT’s network.  The two telecoms providers came to an agreement on their own, but when Mercury looked through the fine detail, they realised they did not have a viable business on the terms they had agreed.  They came to Sir Bryan and after considerable financial modelling, he determined prices and rights for interconnection at a level giving Mercury a viable business.

Another challenge during the early years of Oftel was maintaining the quality of service to the consumer.  The prices were controlled, but the quality of service was not, which created the risk of BT reducing the level of service to increase profit.  Sir Bryan insisted that BT published statistics relating to quality of service.  There were many complaints from customers who, by writing to their MPs, got the attention of Oftel.  He also insisted that BT pay compensation to customers who were not receiving an adequate level of service. They were given 48 hours to repair a fault, and then ordered to pay £5 per day beyond that, for every day the customer’s telephone was not working.  This intervention improved service dramatically.

Sir Bryan reflects that the complete liberalisation we have today of network competition is very helpful.  The big challenge of the moment is the switch to fibre optics and how to maintain a competitive environment under that technology.  There is still some way to go to in terms of quality of service.

Office of Fair Trading: In 1992, Sir Bryan left Oftel as he was appointed Director-General of Fair Trading at the Office of Fair Trading.   He believes the government selected him for the post because of his enthusiasm for promoting competition to make things better for the customer.  It was a less exciting role for him as many of the decisions were made by ministers as it was very political.  Most of his job involved making recommendations to ministers which they would decide whether or not to accept.

International Accounting Standards Committee: Sir Bryan became the Secretary-General of the International Accounting Standards Committee.  It was an exciting opportunity because at that point most countries had different rules.  For big companies operating in many countries, you would have to prepare accounts according to the rules of the country that business was operating, and then convert them all to the system the head office followed.  His task was to create a worldwide accounting standard.  During his time there, Europe agreed the standards, and now most of the major economies outside Europe use them.

Portfolio: In 2001, Sir Bryan finished with the International Accounting Standards committee and had a number of non-executive directorships along with being a founder member of the Equality of Access Board, which was established by BT under agreement with Ofcom (successor to Oftel) for improving the competitive environment by monitoring the work of Open Reach, the part of BT responsible for the local exchanges.

He became non-executive director of RM which was the biggest UK manufacturer of computers when he joined.  Sir Bryan was impressed by the efforts the company made in linking technology with education. At the same time he was on the board of Inmarsat, an Anglo-American company operating satellites for mobile phone services. They are developing connectivity for aeroplanes, both for the cabin and the cockpit.

Sir Bryan reflects that his eight years at Oftel are the key point of his career. He is proud of the role he played in permitting and encouraging competition in the networks.

In 1989 Sir Bryan was awarded a knighthood for services to the telecoms industry.

Sir Bryan suggests it’s important to be thoughtful.  He says it’s important to work hard at whatever you are doing, so that you fully understand it – don’t take things at face value. It’s worth challenging things if you don’t think what is being presented to you is right.

Interviewed by: Alan Cane on the 13th December 2016 at the WCIT