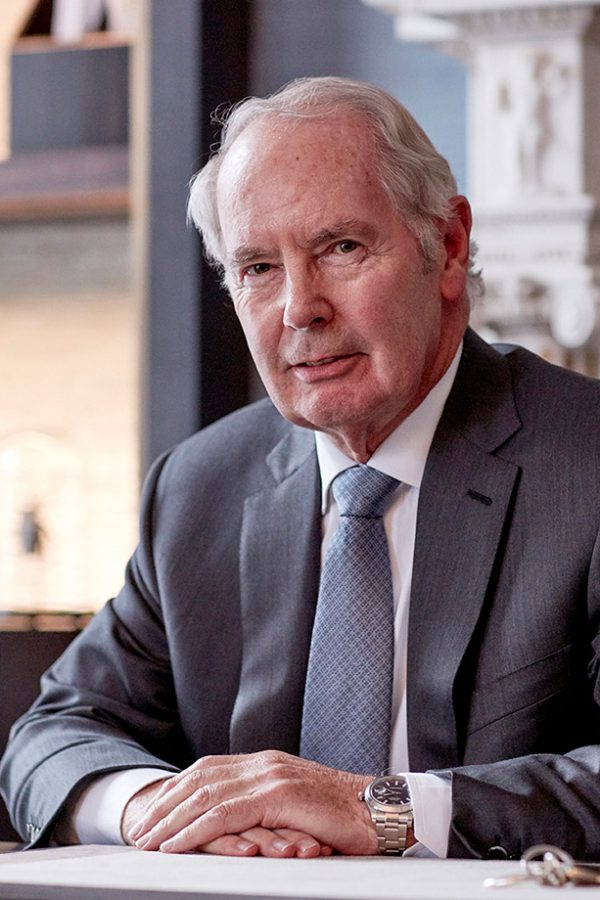 Sir Peter Rigby left school and joined the computer industry working for NCR, Honeywell and the Diebold consultancy.  He was a programmer who went into sales.  It was not until he was 32 in 1975 that he started with £2,000 of his own money and launched SCR, a recruitment agency for IT staff.   Seven years later he sold the company for £1 million.  He ploughed the cash back into growing IT enterprises with his eye always on developing a large organisation.  He has successfully developed his group of companies to become a major player in computer services in the UK and France.  He has kept the company privately owned by his family in order to preserve the values he sees as vital in business.

Sir Peter was born in Liverpool in 1943.  He went to grammar school. Although he learned to fly at 15 and planned a career in the RAF, his father, a railway clerk, lost his sight and could no longer work.  So instead Peter got a graduate position with NCR in their electronic processing division, where he learned to program and then design systems. He was fascinated by mainframes. He wanted to sell solutions, but NCR thought him too junior, so he left and joined Honeywell, then a young company selling an IBM-compatible product.  He was successful, starting in Manchester and then opening up the North East for the company.

However, he felt he needed more technical experience so joined a consultancy, John Diebold, working in Frankfurt on their research programme, writing papers for presentation.  After a year he was invited back to Honeywell and re-joined the company as a salesman in Birmingham.  He was very successful, becoming their youngest branch sales manager and subsequently branch manager. He enjoyed sales because of the contact with people and the scope to make a real difference to a company by selling them a solution that would change their business.  Their main competitors were IBM and ICT (later ICL). However, Honeywell did not promote internal talent to senior roles, which were always occupied by Americans.  Formal training was minimal, and he learned almost everything from experience.

In 1975, at 32 and with a young family and savings of £2,000, Sir Peter started his own recruitment business, servicing the market that he was familiar with.  Companies buying mainframes or providing computer bureau services needed technical staff, so he established a staffing agency, SCR, starting in Birmingham then expanding to London, Manchester and then internationally.  Within five years he had created a multimillion-pound business with substantial margins.  He divested the company, reluctantly in 1982, for £1M to its then managing director (but subsequently bought it back 15 years later).  In parallel he acquired a computer bureau in Birmingham (SCC) which he developed into a computer services business which still exists.  He saw services as the real opportunity: providing professional and technical support for the machines, rather than selling the hardware. This was unusual in those days.

In 1983 IBM brought out the personal computer, which he saw as a connected device with enormous potential to provide computing to all categories of organisation, not just large companies, although his contemporaries were sceptical.  He developed SCC, primarily a systems integrator, into a reseller.  He set up as an IBM dealer, and had established a string of retail outlets across the UK called The Byte Shop. He was very successful.  When Compaq entered the market, he became the first Compaq reseller, providing IBM-compatible portable devices.

He identified a second opportunity in distribution and set up a parallel stream, ETC – Enhancement Technologies Corporation, which became of the largest distributors for manufacturers like IBM, Compaq and Toshiba.  He eventually sold the business, by then renamed as SDG, Specialist Distribution Group, for $250M to US listed corporation and used the money to diversify.

To date Sir Peter had self-funded, but the next move, acquiring an international group for £100M, introduced debt into the business. However, this gave him a distribution business over ten countries, reselling technology plus services wrap.  They established data centres and developed cloud-based platforms. They were the first in the UK to have government accredited secure cloud – Sentinel, which enabled them to win major public sector contracts.   Across the board the company has a very long-standing blue-chip client base, which he attributes to the high level of customer care they provide.

Sir Peter has had opportunities to list companies publicly but believes there are advantages to private companies, such as the ability to invest for the long term, not being answerable to shareholder demands, short-term focus on growth and constant pressure to demonstrate ROI.  Particularly in technology the focus on instant success often results in value being attributed wrongly. Private companies tend to remain British owned and are more able to protect their status in the long term.  They also keep their staff for longer – while there are no shares there are other ways of compensating people.  He intends to keep the company private.   His two sons are fully engaged in the businesses and succession planning will ensure that it remains a family operation.

In and Out of Retail

Sir Peter felt that the future of computing was in the home and tried to buy PC World at an early stage, but it was acquired by Dixons.  So, he established Byte Computer Superstores, a chain of 17 shops, plus 60 concessions in Office World, selling PC-based technology to the consumer.  Their differentiator was that they understood the technology, but it emerged that consumers were only interested in price.  Moreover, as soon as they opened a store, PC World would establish one nearby and undercut them.   He reluctantly sold it to Dixons.  Later, Stanley Kalms admitted that that this was strategic – he had recognised that they were better and posed a threat to PC World.  They came out of retail around the years 2000 and refocused on the core business of SCC.  While they did not lose money on the Byte deal, they missed out on the explosion in connected home computing that followed.  They also made a mistake on mobile phones: although they distributed phones, they did not adopt the business model of selling devices and airtime on behalf of a provider, a market that became hugely successful.

Sir Peter has made 75 acquisitions, not all of which were successful – TW2 for instance, bought around the dot com boom, grew fast was not divested quickly enough.  He is candid about his reasons for buying companies: to add new territories and customers to the business, to acquire new skills, or because they were cheap – especially distressed businesses that he could turn around.  Integration is critical: he feels that, too often, acquisitions are stranded once the value has been extracted. Businesses that have been part of a substantial organisation are easier to integrate than those dominated by a particular individual.  Sir Peter has maintained his interest in aviation; aircraft have been part of his operation and he acquired a number of aviation business, including helicopter transport, air ambulance and airfields and now runs an aviation group that includes seven airports.

The group is now based on six pillars of business; information technology, aviation, hotels, property development airport and private equity.  However, the technology business is around 80% of the turnover, although he is quick to point out that margins on IT are much lower than they were back in the 1980s.   While he slightly regrets not going into software development, he recently established an innovation group to explore AI and machine learning and sees huge potential in the development and application of analytics in vertical markets like healthcare.

Sir Peter observes that the UK tends to adopt outsourcing as a business model, especially in Government.  This is often unsuccessful because the problem is simply devolved to the outsourcer who may be more motivated to maximise value from the contract than meet all the deliverables perfectly (or has hopelessly underestimated the complexity of the requirement).  Over the last few decades there has been a grim toll of failed IT projects – and failed service providers.  He believes that the customer should retain control and manage the outsourcer so that agendas remain   aligned. Otherwise, outsourcing just becomes a commodity business.   He also believes that there are some activities that should not be outsourced and that a hybrid solution can be a good compromise.

Sir Peter is appalled by the ease that ownership of key infrastructure like ports of entry, utilities and transport can move offshore.  He compares the UK to France, where national industries exist for cars, shipbuilding, aviation and nuclear, in contrast to the UK, where electricity, water, and public transport are owned and/or operated by foreign companies.  The UK is good at design but less good at monetising and therefore is vulnerable to US or Asian capital.

Sir Peter recognises the risks in artificial intelligence, especially its scope to be weaponised.   However, he is positive about technology and would advise young people to consider a career in IT because of the advances, the capabilities and the opportunities.    He is also positive about his own business, which is thriving both in technology and property development.  He is particularly proud of his hotels, where he has invested much personal effort in sensitive restoration of period buildings. He is keen to protect his company for future generations, retain the standards of customer care that differentiate it, and keep it private.

He considers that an entrepreneur is born, not made, and that successful entrepreneurs have a constant flow of ideas that they want to translate into reality.  He does not believe that ruthlessness is necessary to succeed in business and believes that with success comes social responsibility: an obligation to put something back.  To this end the group donates 5% of pre-tax profits to the Rigby Foundation, which was established 30 years ago to fund community projects.  He has made time for other activities, including chairing the Millennium project in the Midlands and the local Enterprise Partnership, among others.  He actively encourages his sons to engage in similar activities.

Although Sir Peter did not realise his ambition to join the RAF, he has flown more hours than RAF pilots.  While his contemporaries moved to desk jobs at least a decade ago, he is still flying, was commissioned in the Auxiliary Air Force as Group Captain two years ago, and now advises the RAF’s senior leadership. He sees this as an absolute privilege, and probably something he would not have risen to through a conventional RAF career.

Sir Peter can be very direct and enjoys the relative managerial freedom that a private company allows.  He suspects that many corporate managers are constrained to say what is expected rather than what is true.  His is sceptical of consultants who tend to tell you what you already know, though accepts that they have a role in risk-averse public companies.  In his private company he is less risk averse and can follow his instinct.  However, his view is that to succeed you must be a very good judge of people: putting the right people in the right places is one of the key factors of success.   For himself, he believes that his father’s illness was a critical point in his life; it destroyed his father’s capacity for productive work and crushed his own career aspirations.  He attributes much of his subsequent determination to succeed to this difficult episode.

Interviewed by: Richard Sharpe on the 29th March 2019 at the offices of Rigby Group plc