Mention the name Sinclair to a technologist of a certain age and expect a lively response; always nostalgic and tinged with either enthusiasm or frustration. Sir Clive Sinclair, who died on the 16th September 2021 at the age of 81,  must have been one of the UK’s most prolific innovators, but some might say (disproved by others like Dyson and ARM) that he embodied the cliché that Brits are great at ideas but not so good at turning them into sales.  Nevertheless, Sir Clive has had an influence on the industry disproportionate to the success of the Sinclair product portfolio.

Chris Curry, who was later to be part of the Acorn computer phenomenon, worked first for Clive Sinclair.  In 1966 Chris applied for a job as an engineer, having bought one of Sinclair’s early products, an X-10 PWM amplifier, which he says didn’t work very well.  He says it was “very hectic”.  Clive Sinclair was an “irascible person, who was always charging up and down shouting and throwing his slide rule around”. There was always a new product to be developed but, he says, Sinclair had a tendency to go for the lowest possible cost of assembly often at a sacrifice to quality.

While many ideas were ahead of their time or misjudged the market, the ZX range was bang on time, met a growing demand and made an indelible mark on the home computer market.  Some say it launched the industry in the UK.  You did not have to be a geek in the 1980’s to want one. It sold 5 million copies and introduced many of the (younger) industry leaders featured in the Archives of IT to computers. Jo Twist (games industry leader) recalled, “my friend had a Spectrum and I used to go round to her house and we would play games” while Raspberry Pi founder Eben Upton played with his cousin’s ZX Spectrum.  Richard Christou was Senior VP of global computer giant Fujitsu and his “personal acquaintance with computers began with the Sinclair ZX81 where he learned the basics of BASIC.”

Sir Clive was knighted in 1983 for services to industry and was awarded an Honorary Doctor of Science degree by the University of Bath.  He is member of Mensa and was Chairman for seventeen years.

Clive Sinclair was born in Ealing in 1940. His father was a mechanical engineer and his grandfather was the leading naval architect in Britain, designing battleships. He developed his interest in electronics from a very young age, he says: “I remember when I was a schoolboy, at the age of eight, my father bought me a crystal set, which I absolutely loved and was amazed by and I think that triggered off an interest in electronics.” (If younger readers don’t know what a crystal set is, see https://en.wikipedia.org/wiki/Crystal_radio.)

While his parents wanted Clive to go to university, he wanted to get out into the world and make a living. He got a job with Practical Wireless (magazine) as a journalist and told his parents it was a holiday job. By the end of the “holiday” Clive says: “I was doing well and that was the end of it, university-wise.” It was at Practical Wireless that Clive got to experiment with electronic components and started building things. He stayed in journalism until the age of twenty-three.

Having experimented with electronic kits, Clive started Sinclair Radionics in 1961 designing, building, and selling small radios by mail order, a new business model approach at that time. He says it did not require a great deal of insight: “What you needed was a soldering iron, it came with a printed circuit board and it wasn’t too difficult.”  Over the next 20 years he developed a series of products. Together with his brother Iain, an industrial designer, Clive started designing and developing hi-fi kits with turntables and amplifiers; System 2000 and Neoteric.

The Sinclair Executive, slimline calculator came in 1972. The most portable pocket calculator of the age was ahead of its time and quite a status symbol.  It sold for £79.95 (about £1,000 in today’s money) in 1972 and offered only basic maths functions.

Sir Clive explains: “So called pocket calculators in those days, were closer to the size of a brick than a pocket instrument.  My idea, with my colleagues, was that if I could take the chip and reduce its power consumption by switching it on and off, so it was only on for ten per cent of the time, literally ten per cent, I could cut the power consumption dramatically. so instead of having great hefty batteries, it had hearing aid cells and it was only eight millimetres thick and it would just slip into your front pocket.” In 1975,.In a similar vein, Clive designed the first (black plastic) watch with a single chip, It was produced as a kit version at £17.95 and £24.95 ready-built (about £200 in 2019 money)

Sinclair Research and the ZX 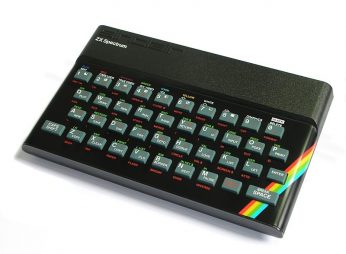 In 1979 Clive moved into computers. His breakthrough came with the ZX80, followed closely by the ZX81 and ZX Spectrum; the latter two were produced under the company name Sinclair Research

Clive developed the idea for the first home computer after he watched the joy his son found playing with the Tandy TRS-80.  “I saw what computers could do, but they were very expensive; the equivalent to perhaps £2,000 in today’s terms (about £500 then), and I thought, if only we could make one for the right price, which I deemed to be £100 in those days, then it would become something that everybody could have.”

Clive says: “The ZX80 used a lot of discrete components and then with the ZX81, I mocked up a lot of the discrete gates into one chip from Ferranti; the entire computer only had four chips in it, at a time when the best competition had 46.”  Alongside his brother, Clive worked with designer Rick Dickinson who designed the look for the ZX machines. Clive says: “I have always loved good design.  I can’t do it, no skill at all myself, but I can appreciate it, and my brother is a very great designer and I’ve always loved his work, and the work of others.” 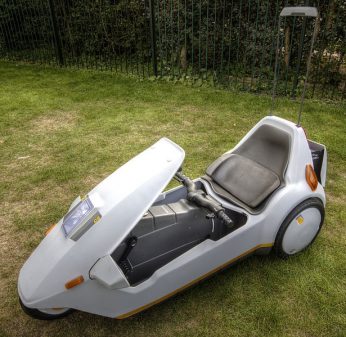 In the mid-eighties, the market for computers hit a downturn and Clive shifted his focus to electric vehicles; one of his life passions. In 1985 he produced the Sinclair C5 car (or vehicle as he prefers to call it)

with, he says, “disastrous results, but otherwise quite enjoyable”. He had originally started paper designs for electric cars forty years earlier. This passion today sees him focusing on electric bikes. He adds: “I also did the Zike, an electric bike, and I’m still sort of doing electric bikes.  Now, they’re not on the market because the European Union has imposed a punitive 130% duty on them, so I can’t import them and I don’t think I can get them made in the UK, though I might try.”

Clive’s view of the future

While describing Elon Musk as a genius, Sir Clive shies away from the title himself, saying that it is for other people to judge. He attributes his ability to create ideas to being able to project forward saying: “I think what I’ve done well, if I may say so, is to see the future.  Forty years ago, I gave a talk to Joint Committee of Congress on the future, that was the purpose of the committee. I projected a lot of things then which came to pass, including driverless cars.

On the subject of artificial intelligence, Clive says: “Once you make a machine, a robot with human capability, and that’s entirely possible, you might lose control and that might make another machine that’s even better, and so on, so it’s a very dangerous path.”

Asked what the Government should do with the IT sector, Clive suggests that it should be left alone, saying: “you get government involved you’ve really screwed it up.”

Clive believes that the UK has potentially the best engineers in the world, citing the aerospace industry as an example, saying: “We have brilliant engineers in this country, perhaps the best in the world.”  His advice for young people entering IT today or on becoming entrepreneurs is, “Don’t give up. Stick at it.” Advice which reflects his own tenacious personality. Clive has always been an optimist and taken a tenacious approach to both design and business. He says: “It’s just a natural optimism and I always firmly believe that the future will be good.”

Original article written by Tom Abram, Director, Archives of IT for the BCS Magazine IT Now in 2020.

Based on AIT archive content, including Richard Sharpe’s interview with Sir Clive